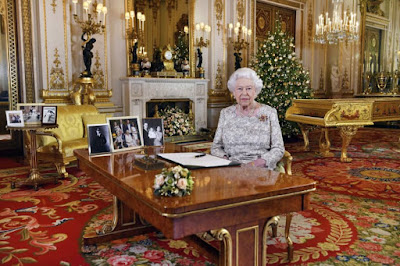 Christmas came and went, an 8 year old migrant child died in American custody on Christmas Eve and humanity still only has 12 years to limit severe irreversible climate change. But look on the bright side -- the Queen granted us her annual Christmas message! A statement that was broadcast live over CBC radio into my home, and the homes, cars and public places of millions of other people across Canada and across the Commonwealth.

During her statement -- made in a luxurious room that included an actual golden piano behind her -- the Queen stated that she believed “the power of faith, frequently inspires great generosity and self-sacrifice”, and that "With two weddings and two babies, and another child expected soon, it helps to keep a grandmother well occupied" Our poor queen! She is very busy.

Statements such as these are made particularly ironic and cuttingly cynical by the fact that the United Kingdom is instituting a campaign of -- as a UN report described it -- “mean-spirited and callous” austerity effecting it’s most vulnerable and destitute citizens. With “a 7 per cent rise in child poverty, a 60 per cent increase in homelessness since 2010 and exponential growth in the number of food banks.” The UN special rapporteur on the issue saying “'I have spoken with people who depend on food banks and charities for their next meal, who have sold sex for money or shelter, children who are growing up in poverty unsure of their future”. He only visited the country for 12 days.

While this campaign of vicious austerity was implemented, the royal family spent 2 million pounds, of their rather generous welfare state allowance on clothing for the royal wedding. The local council ordered the streets cleared of the homeless so that these new clothes would not be ruined by any unfortunate background. What a show of “great generosity and self sacrifice”.

Just like the great show of self sacrifice that the Queen will display when she will have to move out of her room in Buckingham Palace temporarily -- along with the 10,000 pieces of art in the royal collection -- while the palace undergoes a state funded 369 million pound renovation. Apparently this money couldn’t go towards her staff at places like Windsor Castle though. They almost went on strike in 2015 over their “appallingly low” wage of  as little as 14,400 pounds a year, or about 21,000 USD.

It would have only cost 293,000 pounds to give Grenfell tower proper fire protection, thereby saving 72 lives.

But none of this is a shock, the British monarchy has always been a parasitic leech. A leftover from the middle ages. A reactionary symbol of hierarchy, empire and a racist sense of superiority. A monarchy whose largest, most central crown jewel was stolen from India during its time as a blood-soaked colony.  A monarchy that has no reason to still exist in the United Kingdom, never mind here in Canada. This has long been true, but never more obviously so in this time of looming global ecological catastrophe and sickening growth of extreme economic inequality.

The real message as the world heads into the New Year is that we desperately need a fundamental restructuring of our society. The removal of the retrograde uselessness that is the monarchy will necessarily be a part of this restructuring.

Posted by Michael Laxer at 8:42 AM