The Rising Right, Farley Mowat, the CBC, Horwath & more -- October and November on The Left Chapter in review 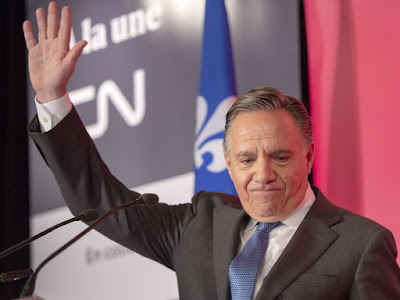 October and November saw 71 posts of various kinds on The Left Chapter.

Included among these were a look at Liberal cynicism in Trudeau's "progressive" farcical climate change hypocrisy continues, new installments in our look at the USSR in the late 1980s like The Ukrainian Soviet Socialist Republic 1987: Photos, Culture, Economy, History & more -- Socialist Republics of the Soviet Union Series,  Natalie's recipe for a hearty fall classic Beef Barley Soup w. Kale, Parsley & Carrots, an Open Letter Re: The Closing of the Saskatoon Office of the Provincial Archives at the University of Saskatchewan, we posted 11 historic anti-war posters in honour of the 100th anniversary of the end of the great imperialist slaughter WWI including Peace - Poster by Tran Mai, Vietnam, 1985 and art posts such as Yuri Pimenov, People's Artist of the USSR (1903-1977) w. 50 Colour Plates.

Two of our most widely viewed and shared posts are from our ongoing series of posts of vintage leftist leaflets and vintage postcards.

Without any further ado, here are the top six posts, in terms of hits, from October and November.

1) The rising of the hard right in Canada

What a difference four months can make.

Since June we have witnessed what is becoming a seismic shift in the political landscape.

2) Farley Mowat Speaks Out on Canada's Role in Vietnam, 1966

Published in 1966 this leaflet flowed out of a conference that was held in Toronto in opposition to the war in Vietnam and looking at Canada's role in it. The conference was organized by several anti-war groups.

3) The CBC notes the victory of fascism in Brazil by how it could benefit Canadian business. Seriously.

Fresh off of her appearance at an Ontario Chamber of Commerce event mere days after that group had celebrated successfully lobbying the reactionary Ford government to rip up Bill 148, worker's rights and the $15 minimum wage, Andrea Horwath, leader of the opposition and alleged anti-Ford "resistance" is at it again.

(Related: NDP's Horwath appears at Ontario Chamber of Commerce event mere days after the gutting of rights of workers)

Today we are taking a look at a postcard folder with 20 panoramic views of the city of Ulyanovsk on the Volga. These date from 1969 during the Soviet era.

Sometimes no in-depth commentary is necessary to show just how odious and ugly a person's thinking and ideology are. A perfect exposition of the sick mindset of Ontario's new government.

Posted by Michael Laxer at 7:37 AM