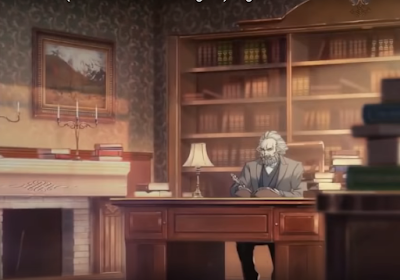 The trailer for the new Chinese anime bio series about the life of Karl Marx has been loaded up to You Tube and it looks interesting.


The Leader, which recounts the story of the German philosopher and socialist revolutionary, will be broadcast by Bilibili.com “soon”, the company said on Tuesday.
The production was commissioned by the central government’s Marxism office, in cooperation with authorities in Inner Mongolia; Weiming Culture Media, which is based in the region; and animation company Dongmantang, Bilibili said on Weibo, China’s Twitter-like service.

We look forward to checking it out!

If the English language subtitles are not showing up press on the CC symbol.
Posted by Michael Laxer at 7:30 PM