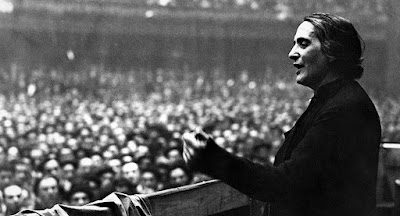 "It is better to die on your feet than live on your knees. No Pasaran!"

Spanish Civil War Communist and anti-fascist  leader Dolores Ibárruri -- popularly known as "La Pasionaria" --was born on December 9, 1895. The daughter of a miner and one of 11 children she joined the Spanish Communist Party when it was formed in 1921.

Ibarruri became famous for her stirring speeches in defense of the republic during the civil war. She was General Secretary of the party from 1942 - 1960 in exile after Franco's victory and lived to return to the country after the fall of fascism to be elected to parliament again in 1977. She was the party's honorary president until her death in 1989.

Her son Rubén died heroically fighting the Nazis in Stalingrad at the age of 22.

Below is a brief biography of her from a Communist Party of Canada calendar in 1999.

"When the years pass by and the wounds of war are staunched; when the cloudy memory of the sorrowful, bloody days returns in a present of freedom, love and well-being; when the feelings of rancour are dying away and when pride in a free country is felt equally by all Spaniards -- then speak to your children. Tell them of the International Brigades" 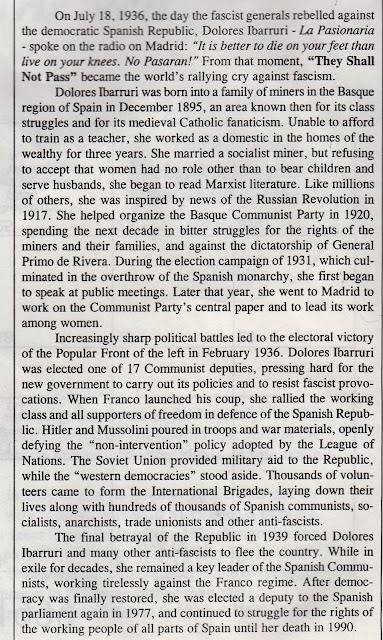