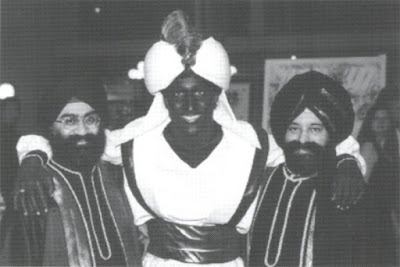 This is the second of our weekly Friday election round-ups of developments -- as well as the inane, bizarre, humorous and unusually facile -- in the great show that is mainstream bourgeois politics during the election of 2019.

Week two of the federal election campaign was puttering along much as one would have expected until the bombshell news that photographs and video of Justin Trudeau in blackface and brownface had surfaced. To say that this upended the campaigns as they had been unfolding to that point would be a huge understatement. 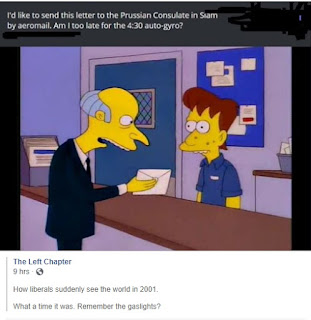 Many on the "left" and self-styled "progressives" -- most of them white -- suddenly became very forgiving of past transgressions that they would almost certainly have denounced had it been a Conservative candidate or Scheer for example. With a clueless privilege born of having grown up never having experienced systemic racism a lot of people who really should know better tried to paint Trudeau's actions as somehow no big deal. Or maybe as simply "youthful" ignorance that happened long ago in a Canada apparently far, far away when white people didn't get that blackface was bad.

Of course, this is total nonsense. Trudeau was 29 and a drama teacher at an elite private school at the time of the first incident that came to light. He was not some kid, he was teaching kids. It was also 2001, not 1951 or 1971.

If he didn't understand that black and brownface were wrong in 2001, why didn't he and how didn't he, because virtually all other liberally minded people certainly did and the opposition to the use of blackface due to its inherent racism was decades old.

In fact, the fight against racism was a major issue in Vancouver at the time and -- in what is a must read piece on the context of the photos -- Stuart Parker has written that "Putting Trudeau’s brownface in its historical context only makes it worse":


First, race and racism were front and centre in Vancouver’s public square. Nobody in Vancouver was living in a post-racial society. Anyone remotely aware in Vancouver in the 1990s, when Trudeau arrived on the west coast, would have known himself to be in a city in profound conflict over a rising tide of racism.
Second, as an actor and drama teacher, he would have known about the conflicts over Jim Crow–style productions that were tearing Vancouver’s theatrical community apart and forcing everyone onto sides. It is clear to me, from the images of him back in the day, that Trudeau chose a side. And it was not the side my family was on.

Trudeau's actions do matter and they are indicative of a person who when he was a full grown adult and a teacher simply did not care about doing something that he surely must of known many people and people from racialized communities felt was deeply offensive and racist.

That says something about the man and what it says is not good. 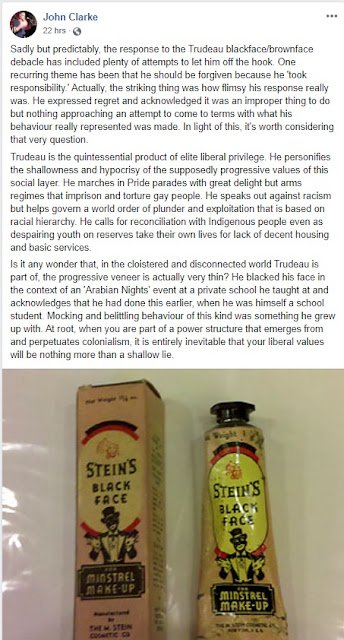 In the wake of the photos NDP leader Jagmeet Singh gave a very powerful response that can and should be heard in full at this link.

Other pieces worth reading on this issue are "Even before #brownface, the 2019 federal election was always about race", "'Yes, that is racist': How Toronto is reacting to photos showing Trudeau in brownface", and "There Is A Second Photo Of Justin Trudeau In Brownface".

Racism is a daily lived experience for millions of people in Canada. It is a serious issue, it does matter and it has devastating, violent and tragic outcomes. On the same day the news of the brownface photo broke the CBC posted this piece "'It's not OK': Frustrated over use of N-word, Sask. mother speaks out" that stands as a stark reminder that we have a long way to go.


As long as someone takes responsibility for what they've said, and addresses the fact that in 2019 some things that may have been said in the past are inappropriate today, that if anything that they've ever said in the past caused any type of hurt or disrespect to one community or another and have apologized for that, I accept that.

One has to wonder just how profoundly Conservative leader Andrew Scheer must regret saying these words mere days before the Trudeau brownface scandal while defending his own bumper crop of Tory ignoramuses.

Of course, given his appearances at Yellow Vest rallies, his defence of Faith Goldy pal and Conservative candidate Justina McCaffrey, and his positions on any number of issues, any outrage from Scheer about Trudeau's past actions is a farce. And many Canadians are pointing that out: "Scheer Dragged Trudeau Over His Brownface Photo But Canadians Are Calling It Hypocrisy"

Journalist Jonathan Goldsbie brought up this inconvenient fact for Scheer on Twitter: 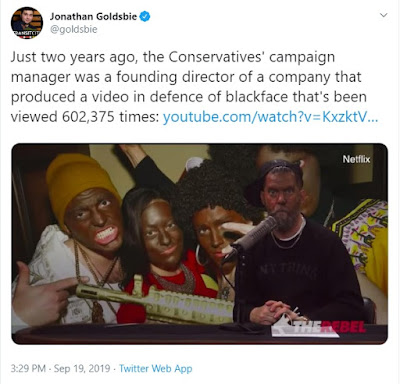 It seems very likely that this will not be the last skeleton in the Conservative closet when it comes to blackface.

Meanwhile in the People's Party it is apparently a faux pas to ask that racism and white supremacy be opposed at all.


Coquitlam–Port Coquitlam candidate Brian Misera said he was tired of being called a Nazi. He posted a series of videos on Twitter Sept. 10, calling on the party — and Leader Maxime Bernier — to distance itself from racism. He said he was trying to find out why “there is human garbage in our ranks,” saying it’s not enough to just “expunge racist idiots.”
In a video, he had said the party needed to be clear about how they are different from hate groups, or he would leave...The party removed him from its ranks the next day...

Despite this and despite the historical precedent that marginal parties polling low with no MPs who had ever been elected under their banner have not been invited to participate in televised leader's debates, Maxime Bernier will be allowed to. Liberalism is always the handmaiden of the fascism that digs its grave.

Last week we all had the joy of hearing the Conservative campaign song penned by a songwriter best known for crappy tunes that were hits when I was a teenager.

Not to be outdone the Bloc Québécois this week released the dreadful Le Québec c’est nous. You can listen to it here. A warning though, once heard it cannot be unheard.

Meanwhile the band the Strumbellas have lent the Liberals their song One Hand Up as a campaign tune. Unfortunately when they did their own translation of it into French instead of calling for people to raise their hands it called for them to remove them.

Canadians for Justice and Peace in the Middle East are trying to counter a campaign by B’nai Brith:

You can sign their petition calling on the NDP to keep her as a candidate here.

The Burnaby North-Seymour Conservatives are on roll of posting the distasteful and misleading.

This week it came to light that they completely misquoted Rick Mercer in a meme: 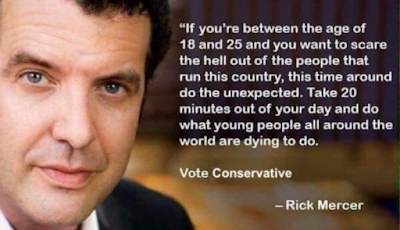 They also appeared to call for Trudeau's death in this one: 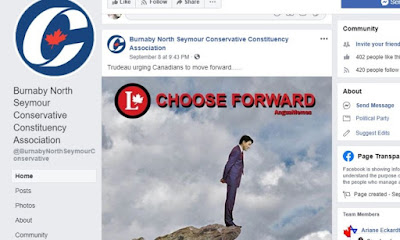 "The problem is capitalism. The solution is socialism." -- Communist Party campaign launches in Toronto

It seems that Green leader Elizabeth May's attempt to use history as metaphor might need a little more research.

The revolving door between the bourgeois "progressive" parties of little difference: NDP recruits former Quebec Green Party leader to take on NDPer who defected to Greens

NDP promises free dental care for households making under $70K starting in 2020
Posted by Michael Laxer at 8:27 AM