"The problem is capitalism. The solution is socialism." -- Communist Party campaign launches in Toronto 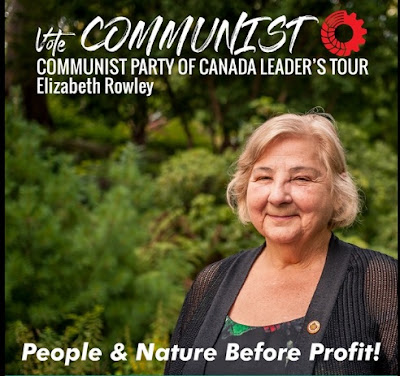 The Communist Party of Canada launched its Toronto area federal election campaign on the Danforth Saturday night with a lively event at which leader Liz Rowley and several candidates spoke.

All the candidates touched on important themes for both the country and the communities they are running in.

Ivan Byard (Toronto Danforth) talked about housing issues while noting that the party's ultimate aim was "working class political power". Bronwyn Cragg, who is up against Finance Minister Bill Morneau in Toronto Centre, framed himself as the millennial taking on the billionaire. He noted that wealthy Morneau's riding had the fourth highest child poverty rate of any in the country clearly indicating that the Trudeau government's priorities are the wrong ones.

Ontario party leader Drew Garvie, running against Foreign Affairs Minister Chrystia Freeland in University Rosedale focused on her terrible foreign policy record in Venezuela, Ukraine and generally. He stated that alone of all the parties, the Communists are confronting western imperialist narratives head on.

Parkdale-High Park candidate Alykhan Pabani spoke powerfully of how landlords in his community are engaging in the "violence of displacement" by driving out tenants using nefarious and frequently illegal methods. To the Liberal plan to tackle the housing crisis by making it easier to buy $800,000 houses he responded "are you serious" and likened it to someone taking the backpack off of a person dangling from the edge of a cliff so as to "lighten their load".

Harinderpal Hundal for Brampton West and Juanita Burnett for Guelph were also in attendance and spoke to how they are organizing in their constituencies to get the Communist message out to people.

Hitting on issues related to all of the three major pillars of the party's campaign -- the economy, climate change and foreign policy -- leader Elizabeth Rowley, who is running in Davenport, spoke at length as to why if Communists got elected "parliament would be an entirely different place."

On the economy she noted that a poll showed half of those who responded were $200 away from disaster at the end of every month. "Working people are living on the edge" due to decades of cutbacks, privatization and neo-liberalism. Communists would counter this in part with programs like genuine, universal pharmacare, free childcare and free education including post-secondary education. She stated that the only thing that should matter when it comes to getting into a university is marks.

Noting that a $15 an hour minimum wage no longer cuts it in many communities, the Communists are calling for $20 an hour. She said the party favours lowering the retirement age to 60 as well as shortening the work week with no loss in pay. Both measures, in addition to making the lives of people better, would help boost employment.

She also called out Canada's trade deals as little more than "economic constitutions" for corporations that need to be repealed. The Communists would prevent the danger of corporations moving factories to other countries via plant closure legislation.

Ultimately, Rowley said, "The problem is capitalism. The solution is socialism."

With regard to climate change, Rowley began by framing carbon taxes as an empty "solution" that does nothing more than turn emissions into a commodity. It is capping and reversing the emissions themselves that are the only way to confront the critical emergency facing Canada, with the Communist goal being to end them by 2050.

Key to the Communist climate strategy is to seize the ownership of natural resources out of the hands of multinationals and place them under public and democratic control. This would allow the government to take important steps like guaranteeing the jobs of tar sands workers during the transition to a green economy.

Rowley rousingly went further to demand that the banks, insurance companies and pharmaceutical corporations also be democratized and nationalized.

The Communist Party is the only party campaigning for "peace and disarmament" and Rowley stated the importance of this in today's international context where the danger of nuclear war remains very real. She also asserted the party's unequivocal opposition to interference in the affairs of sovereign countries and the ongoing attempts at imperialist regime change in Venezuela and elsewhere.

She ended with an analysis of how the danger from the far right in Canada is rising and how the Conservatives have direct and clear ties to it. Maxime Bernier and his People's Party, after all, only came in the wake of him losing the Conservative leadership to Scheer by a tiny margin. A progressive bloc is needed to stop this and Communists are essential to ensuring that this bloc pursues a people's agenda.

To those who worry that a vote for the Communists is a wasted vote, Rowley countered that it sends a message to the ruling classes and bourgeois parties as they know that for everyone who voted communist "100 were thinking about it and 1,000 were wondering." It is a ballot cast for "someone that is worth voting for".

Posted by Michael Laxer at 1:26 PM