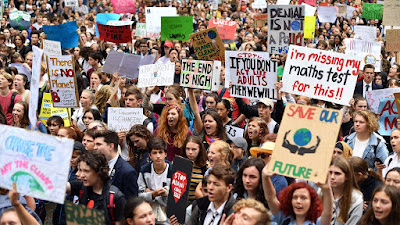 For those interested in news and developments in the Canadian election this will be covered in a separate weekly roundup the first of which this past Friday was: Planes, Rhinos, Lackluster Debates and more -- The Left Chapter Canadian Election Round-up Week One

The Ontario government spent nearly a year in talks with a developer about a pitch to build housing in the province's Greenbelt, despite Premier Doug Ford's promise not to touch the protected area, CBC News has learned.

In the 20th century, the U.S. and Canada carried out a quiet genocide against Indigenous women through coerced sterilization. In 2019, it’s still happening.

Mainstream TV and newspapers, coordinated attacks on social media, and huge amounts of corporate money are all prominent features of a campaign underway in this country to reduce the size of the Communist Party (PCP) vote in the coming parliamentary elections on Oct. 6.

4) That Sun Column Was No Outlier. Postmedia Has Embraced Dishonest, Dangerous Propaganda

Despite the executives’ apologies, Hecht’s op-ed is just another example of Postmedia content that undermines journalism to propagandize for radicalized right causes.

The EU commission has been accused of adopting “grotesque” and “fascist” rhetoric after it created a new “Commissioner for Protecting our European Way of Life” role to oversee immigration policy.

6) As evacuations continue, hundreds of Bahamians were told to get off a ferry headed to the US

"This is the height of cruelty -- denying help to those who need it most," Democratic presidential candidate Beto O'Rourke said on Twitter Sunday night. "This administration has said the words on the Statue of Liberty should be rewritten, and in their actions, they are already changing who we are as a country."

It is perfectly possible that nothing more insidious than administrative confusion led to those 119 Bahamians being kicked off a ferry. But Trump’s comments about “very bad people” also means it’s perfectly possible that more malicious motives were at play. No matter who is at fault, however, this episode should leave us all very unsettled. As the climate crisis progresses, there will be more climate migrants seeking temporary or permanent reprieve. They will not be met with open arms and open borders. They will be met with no legal recognition and little protection, as they won’t have refugee status. They will be met with racism. They will be met, as a UN expert recently warned, with a growing system of climate apartheid. And, if the likes of Katie Hopkins (Trump’s favourite Brit) have their way, eventually they will be met with gun boats.

RUSSIAN communists won 13 seats in Moscow city council elections at the weekend, amid widespread protests at the banning of opposition parties from standing.

9) Jason Kenney: Vladimir Putin’s Jailing of Dissidents is ‘Instructive’ on How to Deal With Environmentalists

10) Boris Johnson Lied to the Queen to Get Parliament Suspended, Court Rules

A court in Scotland added to the unending Brexit mess on Wednesday, by unanimously ruling Prime Minister Boris Johnson lied to the queen in order to suspend Parliament, a move it has labeled unlawful.

Dozens of West Papuan protesters and supporters demonstrated outside the Indonesian embassy on 7 September against state repression of the independence movement.

12) Governing is not for amateurs

A powerful ideological machine that favors the privatization of the state is intent upon inducing people to no longer believe in politicians, parties, or public power. Now, it’s everyone for themselves and God for me. After the demonization of socialism, now we have the repudiation of liberal democracy, focused on the promotion of equal rights. Not even the social pact that laid the foundation for the welfare state deserves any credit lately.

13) SOLIDARITY WITH JAMMU AND KASHMIR

The Communist Party of Canada stands with progressive and democratic voices around the world in condemning the Indian government’s decision to attack the national rights of Jammu and Kashmir, by abrogating its constitutional special status and denying it of its right to Indian statehood. In the process, the reactionary government of Narendra Modi has fanned the flames of ethnic and religious division, regional conflict, and war involving nuclear armed states.

California just passed a bill banning all for-profit prisons and immigrant detention facilities in the state, the Guardian reports — and some of these facilities could be gone as early as next year.

15) Suicide rates at 20 year high: an indictment of Tory austerity

Lost amid the Westminster high drama this week was a stark reminder of the human consequences of austerity, with news that 2018 saw the highest rate of recorded suicides in almost 20 years. According to the report by the Office of National Statistics, 6,507 suicides were registered in 2018, an increase of 11.8% on 2017 figures alone and the highest since 2002.

A crowd gathered at the Babylon Theater here Saturday for an annual memorial for Dean Reed, the American “rebel,” rock star, and filmmaker who famously defected to “East Germany” (the German Democratic Republic, or GDR) in 1972. Those in attendance were among Reed’s most ardent fans, of whom he had many thousands in the GDR when he died in 1986.

Hundreds of thousands gathered this past weekend for a three-day extravaganza of culture and revolutionary politics in the Lisbon suburb of Amora. While the annual Avante! Festival (Festa do Avante!) has a musical lineup that could rival the profit-driven Coachella, the jamboree was embedded with the spirit of resistance and anti-fascism.

"The men received most of the credit, but behind the scenes women were often the doers, the organizers, and advocates, who formed the backbone of the struggle. Juanita Abernathy was no exception and was often a shining example"

"Jeff Bezos is the richest man in the world," Boston-based activist Jonathan Cohn saidon Twitter. "This is disgusting."

Norway’s Labor Party took a hit in this week’s elections. But the radical left surged — showing that socialist politics are still alive in the Nordic country.

When the Winnipeg Police Service revealed results of it sex-buying crackdown last week one thing was missing – the names of 34 men they arrested.

A new phase of armed conflict in Colombia has emerged with the declaration by some former leaders of the FARC-EP (Revolutionary Armed Forces of Colombia — People’s Army) that they are reorganising and rearming as an insurgent force.

Guaido envoy Vanessa Neumann was caught on tape offering to relinquish Venezuela’s historic claim in exchange for backing  from London.

Addressed at length on Cuban television’s Mesa Redonda program, broadcast from Revolution Palace with the participation of Miguel Díaz-Canel Bermúdez, President of Cuba’s Councils of State and Ministers, were the tense energy situation the country is experiencing; its causes and bitter roots in the U.S. blockade; and especially measures taken to minimize the negative impact on the national economy and services for the population.

Facebook has sanctioned Benjamin Netanyahu’s official page, after a post called on voters to oppose a government composed of “Arabs who want to destroy us all – women, children and men.”

The Times of Israel

Campaigns to suppress the vote in April were commissioned by Jews, with an American nonprofit footing the bill in one case, report says.

Prime Minister Benjamin Netanyahu said on Tuesday he would extend Israeli sovereignty over the Jordan Valley and the northern Dea Sea if reelected.

"Sadly, the appeal looks to be solely for political reasons –to appeal to certain voters and lobbyists– rather than to pose any legitimate challenges to the judge's interpretation of Canadian law," said Corey Balsam, national coordinator of Independent Jewish Voices-Canada, a Jewish advocacy group that supports Palestinian rights.

Last week, Boris Johnson met with Benjamin Netanyahu and Mike Pence in surprise meetings at Downing Street. Johnson, in the middle of a Parliamentary crisis, met Netanyahu to discuss Iran and the two-state solution in Palestine. With Pence, he discussed Brexit, trade deals with the US, and Iran.

I spent last week in the Brazilian Amazon in Porto Velho, Rondonia, on the edge of what is called the arco do incendios. The “arc of fires” is a region stretching along the yet-to-be-paved highways 319 and 230, between the towns of Humaitá and Apui in Southern Amazonas, a state that still had 98% of its virgin rainforest intact as of last year.

33) This Is Not the Sixth Extinction. It’s the First Extermination Event.

From the “insect apocalypse” to the “biological annihilation” of 60 percent of all wild animals in the past 50 years, life is careening across every planetary boundary that might stop it from experiencing a “Great Dying” once more.

Climate advocates celebrated Thursday after New York City's public school system announced it would excuse the absences of students who have a parent's permission to participate in the global climate strike on Friday, Sept. 20.

35) Climate Strike: It's gunna be huge

Support for the September 20 student-led global Climate Strike is growing in Australia as the big day nears. Councils, unions and churches are declaring their support and more strikes are being organised every day in what is building up to be the biggest day of protest since the 2003 anti-Iraq war mobilisations.

36) Climate emergency: more at stake than a hotter summer

Catastrophic fires in New South Wales and Queensland have come early in the fire season, which usually starts in October. Climate scientists and frontline fire fighters agree: they are a consequence of climate change.

“Ahead of the UN Global Climate Summit in New York in September, the public want to see the Australian government take a leadership role when it comes to global action on climate change.”

The Trump administration is changing the definition of what qualifies as "waters of the United States," tossing out an Obama-era regulation that had enhanced protections for wetlands and smaller waterways.

“At least seven people” were aware of the story that Brett Kavanaugh had drunkenly exposed his penis to an unwilling Yale classmate, who ended up touching it while trying to avoid him, the New York Times reported. In an excerpt from their forthcoming book, The Education of Brett Kavanaugh: An Investigation, Times reporters Robin Pogrebin and Kate Kelly wrote that Deborah Ramirez’s account of being confronted by the future Supreme Court justice’s penis—an incident that Kavanaugh’s supporters dismissed as uncorroborated during his 2018 confirmation hearings—was supported by their later reporting.

40) 'Going to the streets again': what you need to know about Friday's climate strike

The global mass day of action will take place on Friday 20 September, three days before the United Nations climate summit in New York.

This September, millions of us will walk out of our workplaces and homes to join young climate strikers on the streets and demand an end to the age of fossil fuels.

Posted by Michael Laxer at 8:18 AM