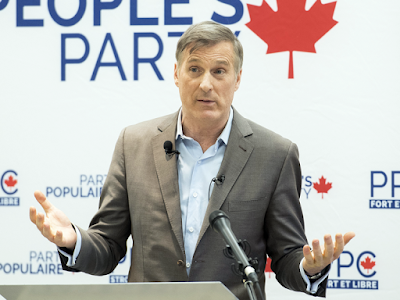 This is the third of our weekly Friday election round-ups of developments -- as well as the inane, bizarre, humorous and unusually facile -- in the great show that is mainstream bourgeois politics during the election of 2019.

People's Party outdoes itself in race to bottom

In the week following the bombshell scandal of photos of Justin Trudeau in brownface surfacing, the People's Party of Canada has been working very hard to be the worst bottom feeders in the proverbial tank.

After letting a candidate go for having the nerve to ask that the party denounce white supremacy and racism, Maxime Bernier and his assorted crew of bigots and knuckledraggers were being what they are.

In fact, instead of denouncing racism Bernier stood by his candidate in Essex, Bill Capes who was discovered to have tweeted things like "Yellow people been working since 5am, black people up at noon. Lol." Apparently he gets a pass because he apologized and "he shares our values and that's the most important [thing]". Indeed he does!

It also turns out that "The former leader of a U.S. neo-Nazi group, a former Soldiers of Odin member and a Pegida Canada official were among those whose signatures were submitted to Elections Canada last year to officially register the People’s Party of Canada, records show."

On a roll the PPC then posted a video of their Great Leader musing about the evils of multiculturalism that included an image of Japanese Canadians interned in a camp during WWII being deported to Japan. They have since deleted that part of the video though without issuing an apology or clarification of any kind.

But hey, Mad Max says it is Greta Thunberg who is too ‘extreme’. OK then.

Remember, the geniuses running some of the televised debates have decided Bernier will be allowed in.

While it is unclear if any serious long term damage was done to Trudeau's reelection chances in the wake of the brownface scandal -- which we looked at last week -- it has brought to the surface deeply troubling aspects of the obliviousness of many Canadians to our past and present histories and realities of systemic racism.

A number of articles worth reading on the issue were published since our last roundup:

Trudeau in blackface: A symptom of Canada’s widespread anti-Black racism

TRUDEAU’S BLACKFACE AND RACISM IN CANADA

Mo Dhaliwal: Global B.C. calls for conversation on blackface, then covers up blackface joke in its own newsroom

With global climate strikes taking place and the issue of the climate emergency becoming a central one, Trudeau decided to announce this week that a Liberal government would reach net-zero emissions by 2050. How? Well with unicorn tails and fairy dust of course!

Actually, in all seriousness, Trudeau has no more idea how they would achieve it than the rest of us but it sounds good.

The NDP tried to call him out on this with the snappy line "You. Bought. A. Pipeline."

Trouble is, as we noted on The Left Chapter, NDP provincial governments have an environmental record that is not terribly great and on the issue of the LNG project in B.C. Singh has been oddly silent!

Someone else appeared upset with Trudeau's environmental credentials:  Arrest at Montreal climate strike after protester reportedly throws egg at Trudeau

Also, "Greta Thunberg meets Trudeau, tells him he's not doing enough to fight climate change" which is an understatement.

Other noteworthy articles related to climate change and the election are:

The Greens were tripping the light fantastic a bit deciding to photoshop reusable metal straws and cups into leader promos and musing about decriminalizing drugs long enough to solve the problem of criminalization only to then criminalize them again (?).

We reported last week that various pro-Israel groups were trying to get NDP candidate Miranda Gallo dumped for her pro-Palestinian activism. Fortunately, at least for now, the party has resisted these calls.

The NDP is MIA on bold labour proposals

Nunavut’s NDP candidate in federal election is 25, just like the Inuit who founded the territory

Why food affordability should be a federal election issue

Posted by Michael Laxer at 3:22 PM