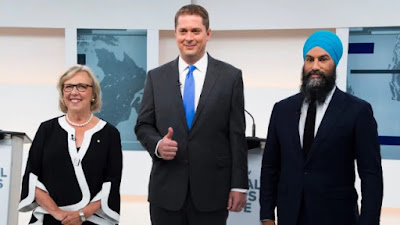 This is the first of what will be our weekly Friday election round-ups of developments -- as well as the inane, bizarre, humorous and unusually facile -- in the great show that is mainstream bourgeois politics during the election of 2019.

Justin Trudeau was a no-show for the first televised federal election debate leaving the other three major party leaders to duke it out Thursday night in Toronto. It was a lackluster affair that was notable for little other than its terrible moderating by Paul Wells and its truly awful commentary panel.

Green Party leader Elizabeth May likely won the debate insofar as anyone did. She seemed more polished and sharp in her sparring and kept on message while for the most part rebuffing or blunting the attacks of the others. NDP leader Jagmeet Singh did well, especially in his attacks on Scheer, though May did seem to get in more zingers.

There was (predictably) very little that separated May and Singh in both policy and performance. They occupy a virtually identical space which really reminds yet again what a joke the vicious and nonsensical virulent antagonism between many of their partisans is.

Conservative leader Andrew Scheer was actually quite bad and wooden. The only saving grace for him came from his rather fortuitous positioning so that he could look directly into the camera and deliver clearly well rehearsed lines as if it was a commercial.

May was at her strongest in the final part of the debate that was centered around foreign affairs. She blasted Scheer repeatedly and on point calling him Trump's "dummy" (as in a ventriloquist dummy with Scheer's mouth opening to do the President's bidding), stating that fighting climate change and other social issues are more important to the Greens than increasing military spending and denouncing the Conservative pledge to move the Canadian embassy in Israel to Jerusalem. She spoke of the illegal occupation for what it was, called out the Netanyahu government for its actions and pointedly noted the hypocrisy of so many in the west when saying "So it is not ok when Russia occupies Crimea but it is ok for Israel to occupy Palestine".

Meanwhile, when it comes to the terrible LNG project backed by fellow NDP Premier John Horgan in B.C., Singh was quite evasive for a supposed "Green New Deal" backer. He simply refused to state whether or not he supported it. It was a serious low moment. You can watch the full debate here.

More vetting  a la Orwell for the NDP

The Left Chapter has been following the disgraceful debacle of the NDP's candidate selection process for weeks now from the appalling nomination meeting in Parkdale, to the farce with Sid Ryan, to the Kafkaesque shambles with Janet-Lynne Durnford, to the shameful rejection of Robbie Mahood.

This has been a travesty that is a combination of heavy-handed authoritarianism and utter incompetence.

On Tuesday another truly grotesque example came to light in the case of Christeen Elizabeth who posted publicly about her case on Facebook: 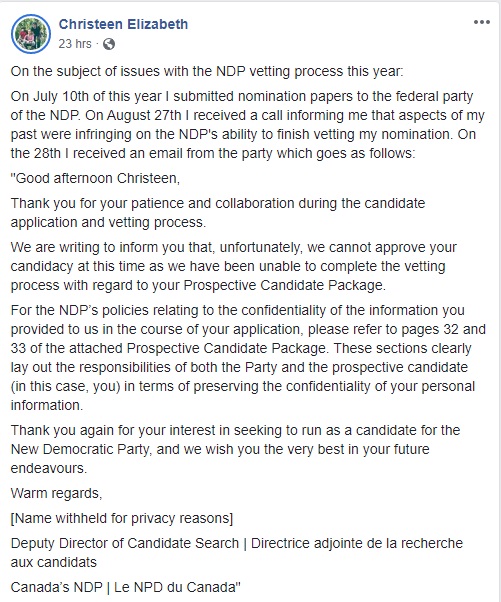 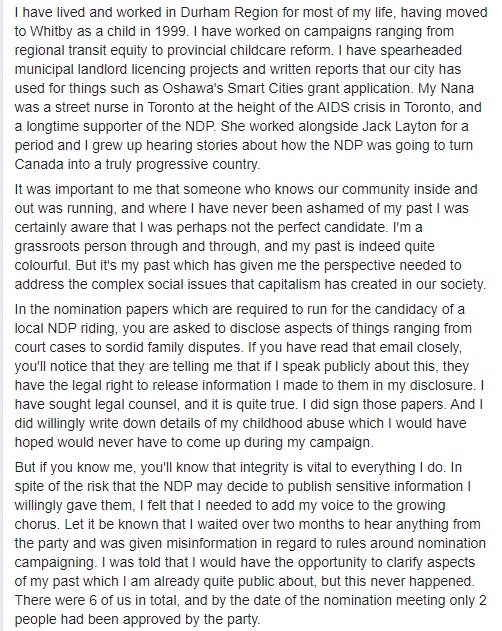 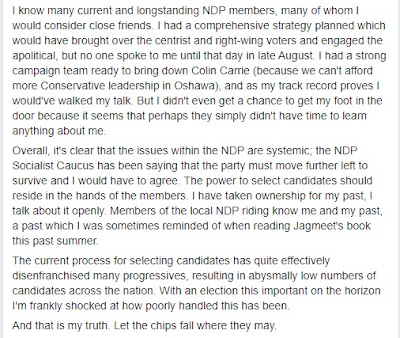 The day after her post -- and on the first day of the election -- the party dumped Thompson-Nicola-Cariboo NDP Candidate Dock Currie for past social media comments.

(It should also be noted that the NDP quite rightly asked a candidate accused of domestic abuse to step aside and the Greens dispensed with one as well when a disgusting anti-Muslim social media post surfaced.)

“Wow, just like the jets my parents flew when my sister and I were growing up middle class like you did!”

While it is normal for major campaigns to book such things for their leader tour the optics of tweeting out a picture of your private jet on Day One when you have been droning on-and-on-and-on about how "middle class"  you are are not good. But that is exactly what Andrew Scheer did of course.

Reactions were less than positive.

Activist John Clarke summed it up quite nicely: 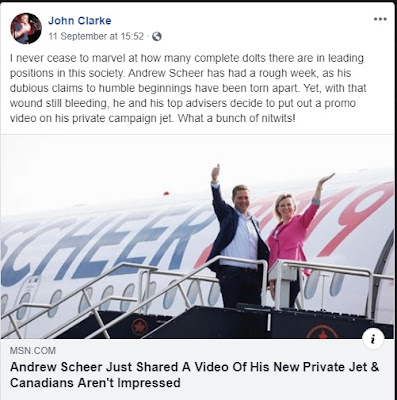 Rhinos pin the tail on an ass

The magnificent folks at the Rhinoceros Party have trolled People's Party leader Maxime Bernier in a glorious fashion. They will be running under the slogan "Don't take a chance, vote for both!". 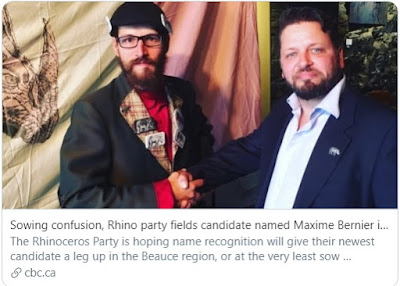 I guess Nickelback was unavailable

Canadian singer Bryan Adams has made many millions off of terribly mediocre hit radio fare co-written back in the day with Jim Vallance.

Vallance, it seems, is now a staunch Conservative.

Putting his tremendous lyrical talents to work for their cause he has penned a rockin' ode with lyrics like:

Apparently a video is coming. Great.

Here is a video that the Conservatives probably wanted to keep under wraps:

For some unknown reason Elizabeth May started the week by saying that she would not whip the votes of Green MPs if they tried to reopen the abortion debate in Parliament. This despite the fact that the party insists that no one who was anti-abortion rights would be allowed to run in the first place.

While Green partisans tried to blow this off as a total non-issue one has to ask, if no one who is anti-abortion rights would be allowed to run why is May musing about how she would be unwilling to force these non-existent MPs to vote according to supposed party policy?

This is either a really stupid "own-goal" on the part of May or maybe they were not as careful in making sure all candidates were on board with the big issues as they would like us to believe. 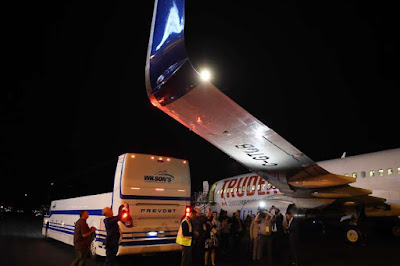 A media bus hitting the wing of your campaign plane on Day One cannot be a good omen.

Elizabeth May has ludicrously been excluded from an upcoming French language debate.

Looks like the Liberals are having a hard time finding sacrificial lambs in southern Alberta.