Socialism on the Farm - Collective Farming in the USSR 1978 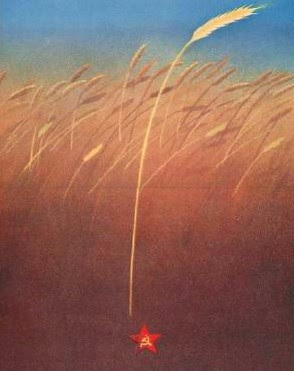 Socialism on the Farm - Reports on Real Socialism 1978

Part of a series of reports about various aspects of socialism in the USSR in the late 1970s, Socialism on the Farm looked at the practice and challenges of collective farming in the republics. It was written by a member of the Communist Party of Israel and a member of the Communist Party of Venezuela and related what they learned on their trips to a number of farms in different regions.

The authors look at the evolution of the farms, the techniques used to increase production given the very difficult conditions in many cases, the issues of drought and how the system responded to it, the way the farms were interconnected and how they were often involved in projects not directly related to agriculture and what village and collective farm life was like at the time in terms of education, health and housing.

They also relate the practice of collective farming to what has been occurring in their own countries.


"In addition," the chairman told us, "our collective farm is joint owner of a hothouse complex, a cement factory, construction and power amalgamations, and a Young Pioneer camp and health resort on the Black Sea. In all, this amounts to one-fifth of our production assets."

and this reminder that the imperialist tactic of starving and strangling the economies of countries that try to chart and independent or socialist path is an old one:


Imperialism's plans go even further, its ideologists have recently proclaimed food to be a "strategic weapon." And it is being used to strengthen the positions of capital, prevent countries from developing independently, and stifle their peoples' fight for freedom and social progress.

We will look at some of the other Reports on Real Socialism in the coming weeks.


The world we live in today is very far from solving the fundamental problem of man's daily bread. Hundreds of millions of people are either starving or living very near the starvation line. In a number of countries whose development was delayed and distorted by imperialism, food shortages are growing and this leads to news forms of dependence on imperialism. 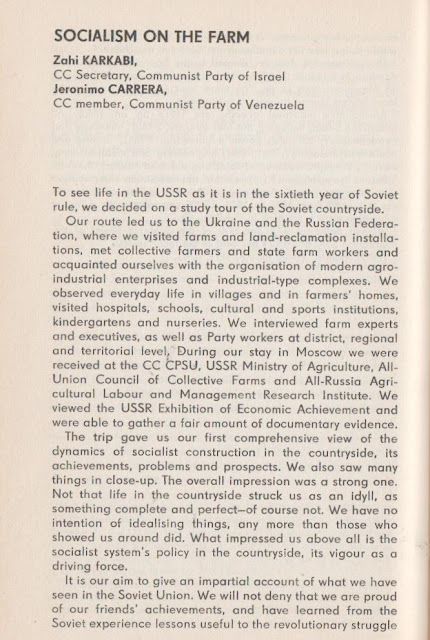 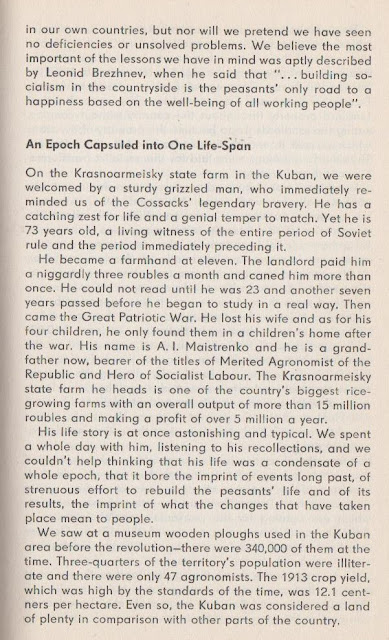 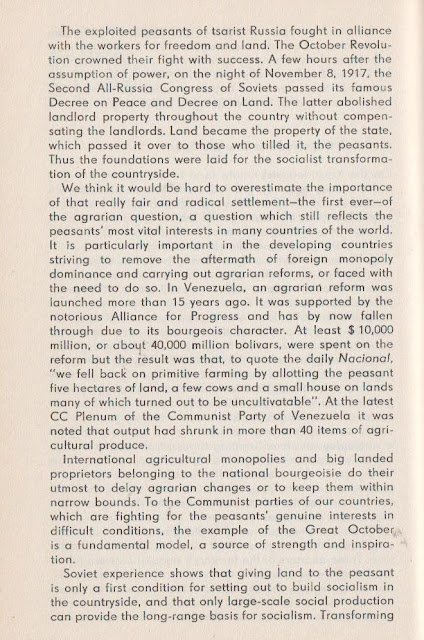 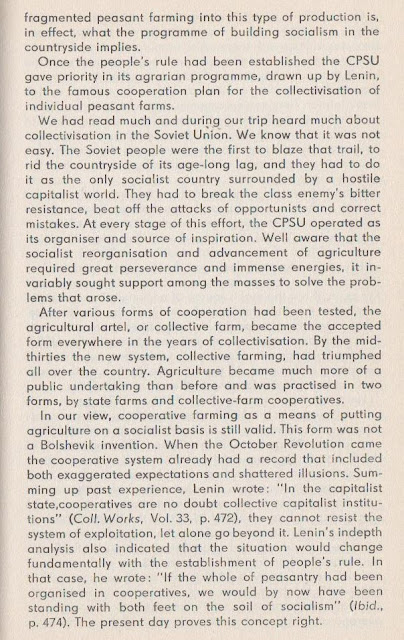 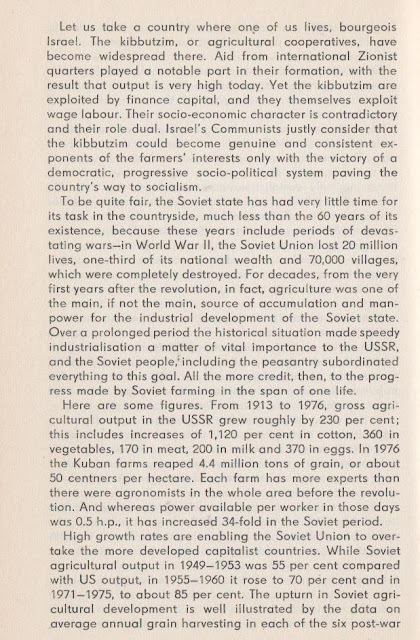 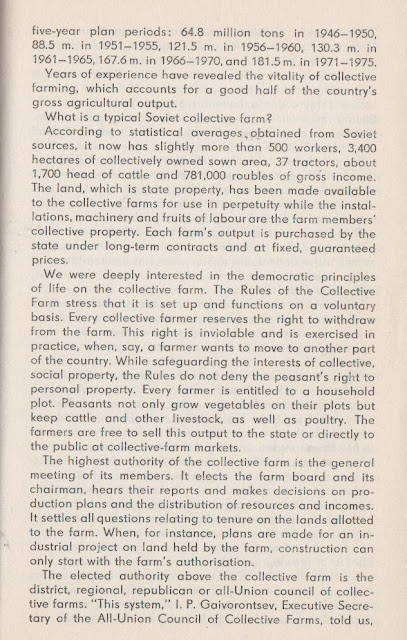 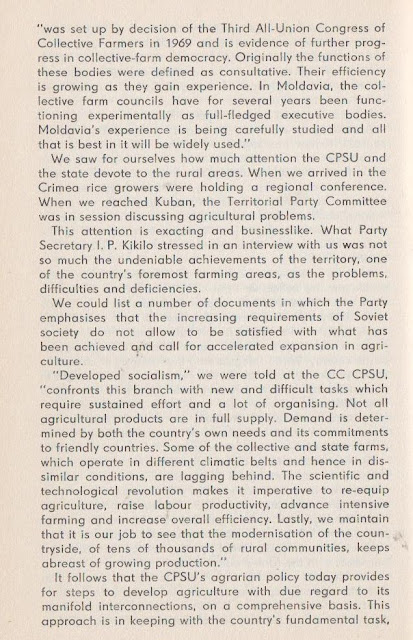 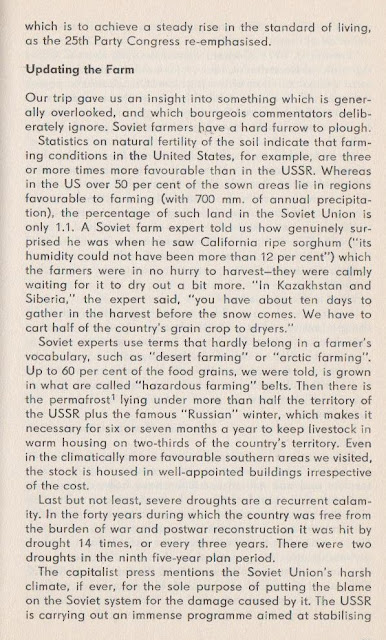 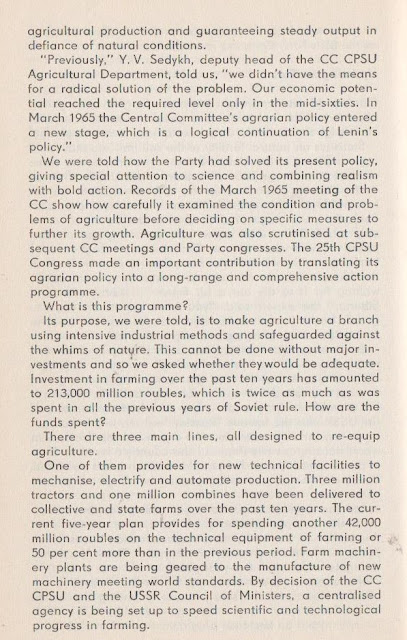 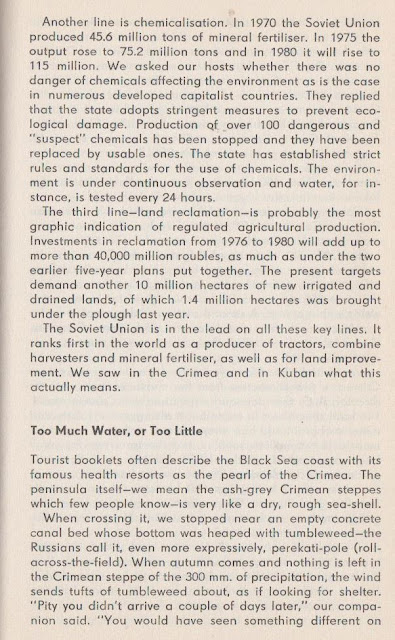 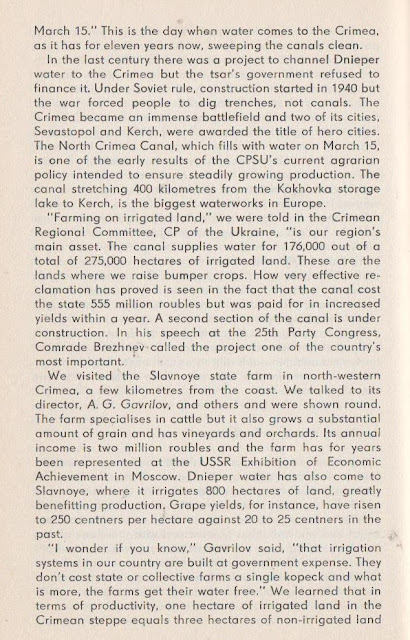 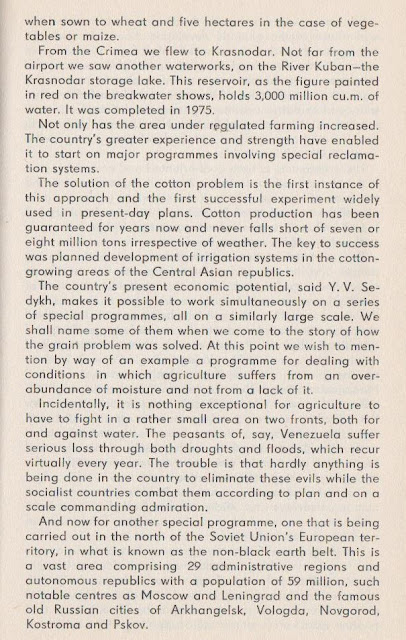 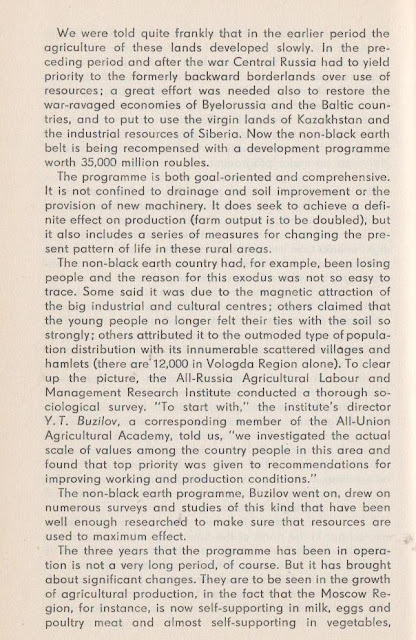 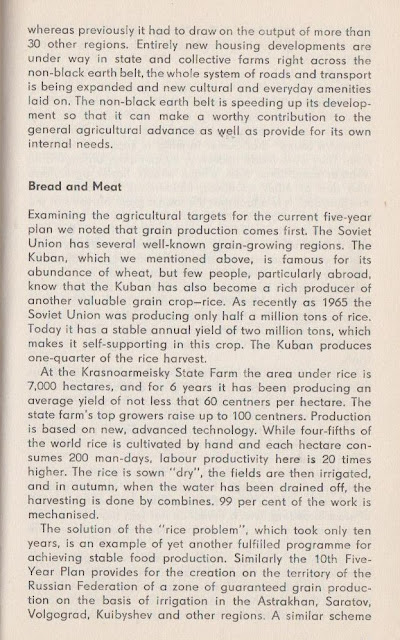 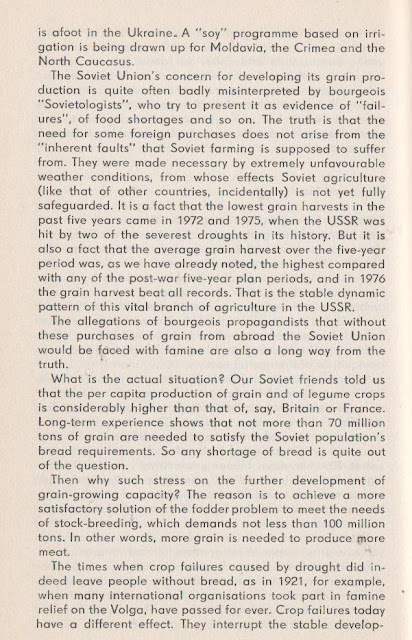 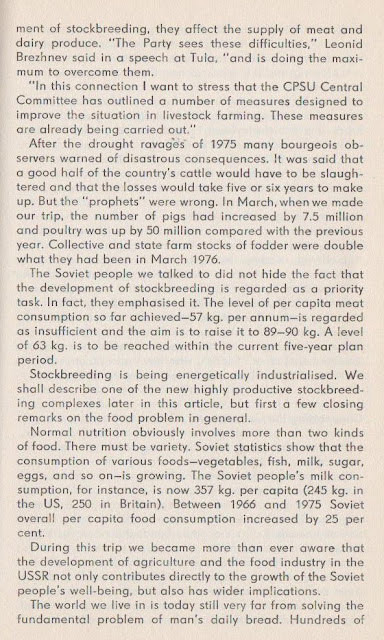 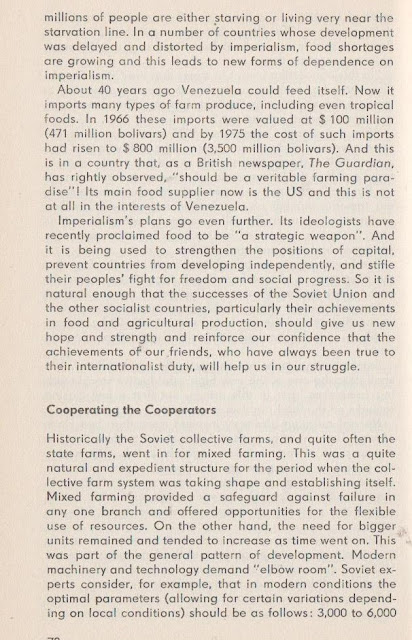 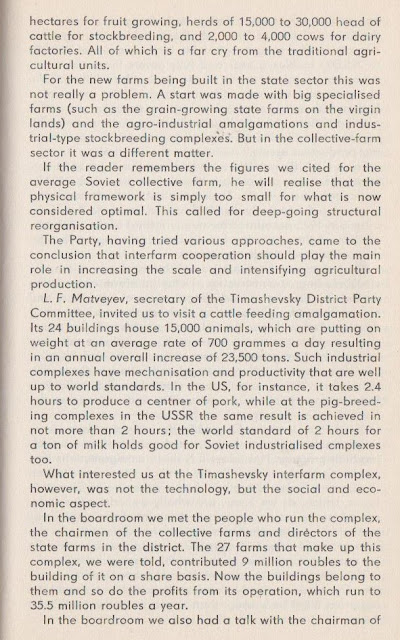 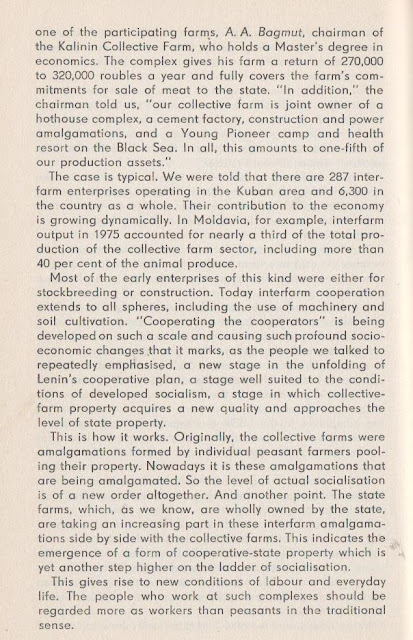 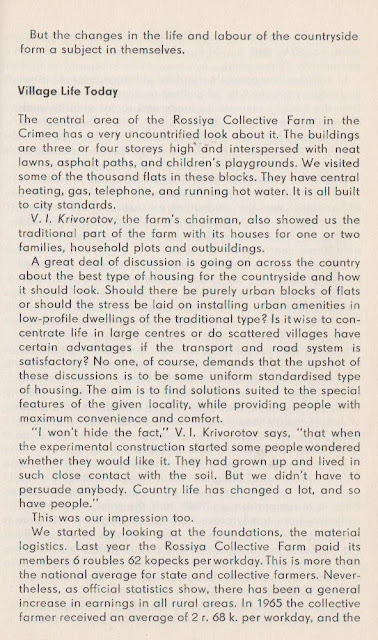 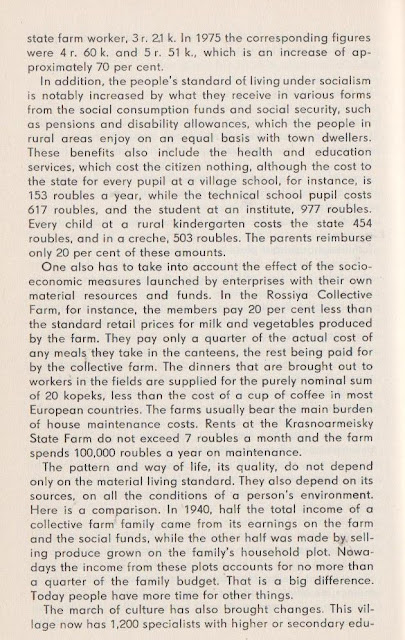 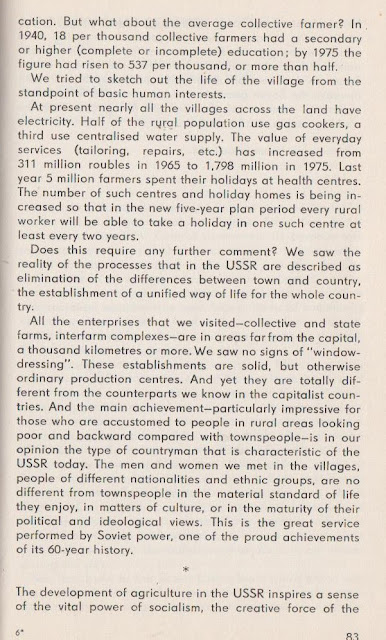 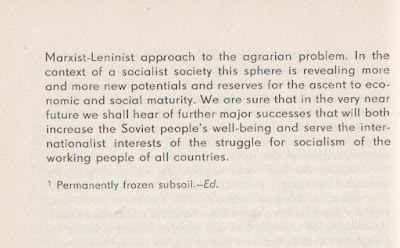 If you have any public, vintage leaflets or booklets you would like to contribute to this project please contact us via theleftchapter@outlook.com
Posted by Michael Laxer at 7:26 AM