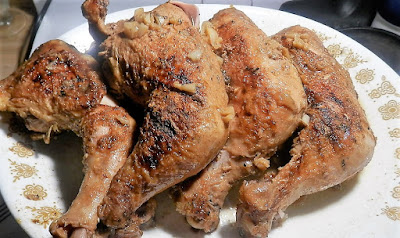 This dish is inspired by a seasoning sauce and paste that is used as a marinade for rotisserie chicken in Peruvian recipes. I have modified it by adapting it for cooking chicken pieces on a charcoal BBQ. The marinade already makes the chicken very flavourful and the smokiness of the barbecuing enhances this.

I used this marinade to make 5 large chicken legs. It also works well with drumsticks or thighs. 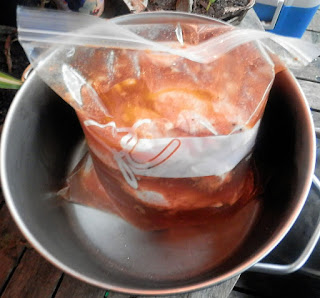 
Combine all of these ingredients in a large bowl thoroughly.

Place your chicken in a large freezer bag and pour the marinade in making sure it covers it all.

Marinade in the refrigerator for at least 2 hours and ideally for 4 hours.

Prepare your charcoal grill as usual.

When ready to cook take the chicken out of the marinade and grill for 2-3 minutes a side directly over the charcoal. Do not discard the marinade.

Once you have finished grilling them place the legs in an aluminium cooking pan.

Pour the marinade out of the bag into the pan around the chicken. While you should always discard marinades used on raw meat if it is not going to be used in cooking, here the marinade will be boiled for an hour with the chicken as a sauce. Groups like the FDA and CDC note that marinade is safe to use again if it has been boiled but if you prefer, of course, you can simply make a second batch of marinade for the cooking and discard the first one. 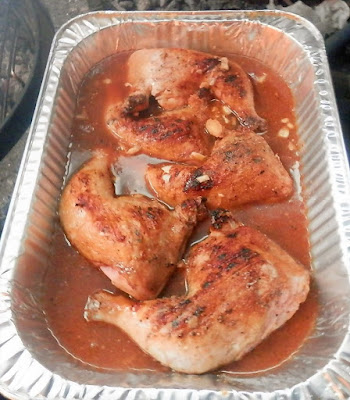 Place the tray of chicken on the grill and cook in the boiling marinade for one hour turning once half way through. (Chicken legs are done when they have reached an internal temperature of 165 degrees F. according to Health Canada). 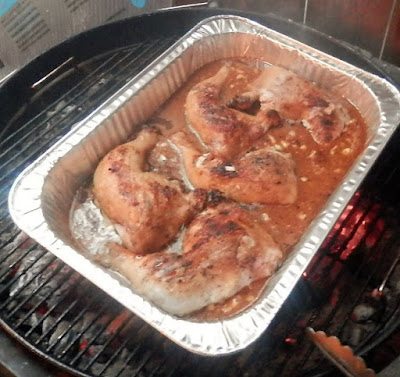 You should regulate the heat and smokiness by using the lid. I like to BBQ this way by having the lid on with the flue open for 10 minutes, off for 5, on again for 10, etc.

Serve the chicken removed from the sauce.

This chicken is perfect with rice. I like to drizzle some of the cooking sauce and some lime juice over it and serve it with a Caribbean style hot sauce on the side for dipping.