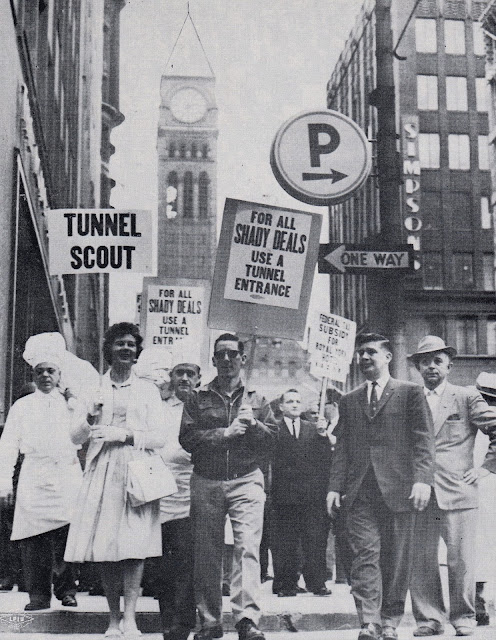 In May, 1961 a strike began at the fancy Royal York Hotel in Toronto that was to prove a long and very bitter one marked by the underhanded and ugly tactics of hotel management. Many of the workers came from immigrant communities and were women.

The reference in the signs of the strikers to "tunnels" was referring to the use of underground tunnels into the hotel by the bosses to ferry in scabs and supplies.

After nearly a year the strike ultimately failed with the workers losing on most of their demands.

To read more about the strike see this article by Jeremy Milloy: A Battle Royal: Service Work Activism and the Royal York Strike, 1961-1962

(The Daily LIFT - Leftist Image for Today - is a new The Left Chapter feature posting a daily photo, cartoon, artwork or other image related to leftist history or contemporary realty.)
Posted by Michael Laxer at 3:26 PM