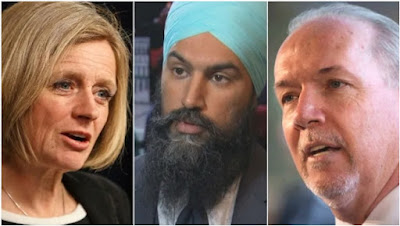 The good folks in the NDP would have you believe that only two parties have ever governed in Canada and that they are the evil Liberals and Conservatives. If only voters would finally throw off the shackles of this duopoly the Canadian people would be liberated for the dawn of new political era.

The trouble in Mouseland is that this is not quite true. The NDP certainly has been in government in Canada on a provincial level and in the last couple of decades to say that its record in office has not exactly broken the mould of neo-liberal governance would be rather generous.

From Darrell Dexter to Rachel Notley to John Horgan to the disaster of a generation in "power" in Manitoba, New Democrats have a proven record of being nothing very fundamentally different that is pretty hard to dispute unless you are willfully blind or buy into the party's culture of groupthink and gaslighting.

We could -- and often have on The Left Chapter -- go on and on about this but two recent examples really show how they are trying to sell you shit as Shinola.

First there is this rather disingenuous post from Niki Ashton who is often seen as a "left" New Democrat. 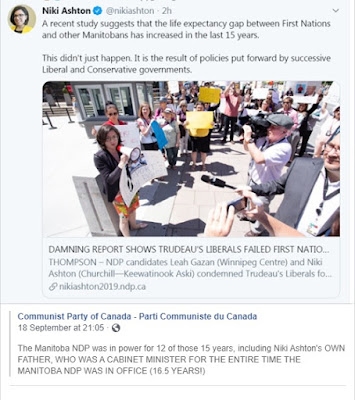 The Communist Party correctly calls her out on what seems an obvious attempt to peddle what are at least as clearly the political crimes and failings of the Manitoba NDP as if they are all on the Trudeau Liberals and Harper.

It is always worth remembering the Manitoba NDP left office with a higher child poverty rate than when they came in and a minimum wage that was lower than that of neighbouring Liberal Ontario!

Then there is the attempt this week by the federal party to call out Trudeau for the -- admittedly totally shameful -- decision to buy the Trans Mountain pipeline. They are so proud of their "You. Bought. A. Pipeline." line that they sent out an email about it. While giving full marks for chutzpah, it is pretty rich for the federal NDP to be putting this out at all.The pipeline was purchased to placate a provincial NDP government whose leader, Rachel Notley, did her very best to push a hard right line on tar sands exploitation and make it mainstream due to her allegedly coming from a "left" party in ways that overt reactionaries could only dream of.

Notley signaled that her government was going to take a quisling approach to collaboration with business and the oil companies on her very first day in office.

The line is even more absurd given Singh's refusal to take a stand on the BC NDP riding roughshod over the rights of Indigenous people and environmental concerns with regards to the LNG project. It is also worth remembering that it was B.C. NDP Premier John Horgan whose profoundly cynical comments after green-lighting the Site C project included him actually saying "When it comes to reconciliation and working with Indigenous leadership there has been over 150 years of disappointment in British Columbia. I’m not the first person to stand before you and disappoint Indigenous people."

It amazes me that any New Democrat could possibly pull off this faux outrage with a straight face. The NDP pretty clearly depends on people either having a short memory or engaging in double think.

As we have noted before, there is more than enough hypocrisy to go around. And there is also more than enough of a history of the NDP in power in Canada to tell us exactly what we can expect to change if they get elected federally which is nothing much at all.

Posted by Michael Laxer at 6:39 AM