Lately The Left Chapter has been reporting on one case after another of the New "Democratic" Party seemingly rigging or subverting the democratic process to keep some candidates out.

There is the appalling case of the Parkdale nomination meeting, the grotesque ousting of Nova Scotia candidate Rana Zaman, the example of Sid Ryan's candidacy and the Kafkaesque case of Janet-Lynne Durnford.

Now Robbie Mahood has been blocked in Mont Royal from seeking a nomination. As he posted publicly on Facebook: 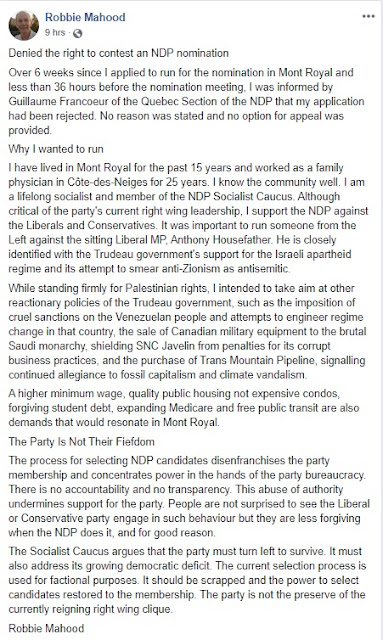 We also know that Socialist Caucus chair Barry Weisleder has been blocked from running.

These sort of top down, anti-democratic, anti-left actions have been happening within the NDP for literally decades. They got even worse under Jack Layton and Tom Mulcair and nothing has changed with Singh in a leadership role which is hardly surprising given that he comes from the profoundly anti-democratic Ontario wing of the party.

From the Waffle fifty years ago to now any attempt to do anything that threatened the powers that be within the party has been stamped out, democracy be damned. The elites of the party from the Lewis folks on through to the vetting of today do not have a democratic bone in their body while also being deeply beholden to illusory electoralist and centrist narratives.

The time has long since passed to leave this most useless swamp of Canadian "social democracy" and move on to a new left project. Every day spent in an empty fantasy that one day the NDP can be made either left or democratic is another day wasted that could have been spent building something worthwhile.

Posted by Michael Laxer at 9:37 PM