Horwath's hand-wringing aside Harden had nothing to apologize for 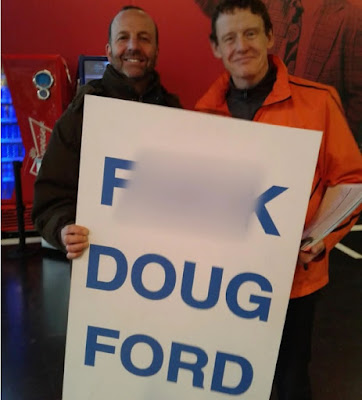 By now many Ontarians have heard the simply shocking news that NDP Ottawa MPP Joel Harden was photographed at a healthcare rally posing with a man holding a sign saying "Fuck Doug Ford".

The horror. Think about the children. If they are younger than 5 or 6 they may not have heard this on Netflix yet, though likely have made mommy and daddy put a coin or two in a jar for saying a bad word like it, right?

Ontario NDP leader Andrea Horwath immediately denounced this terrible transgression. After Harden personally apologized to Ford she piously proclaimed  "I've also once again cautioned my caucus members to be careful about putting themselves, and the rest of us, frankly, in that kind of situation".

She made sure that she could not possibly be misunderstood by also telling the press that she and her caucus had discussed "several times" that "we have to be very careful about attending events where these kinds of situations can arise".

What events would those be? Rallies and protests?

It is truly unnerving to think that working people angry at the Ford austerity regime and the cuts to healthcare and education might show up and express their anger with mock guillotines or by letting the premier know they think he is silver spoon asshole.

That they might answer his utter contempt for them in kind.

Don't they know any better? What a lack of parliamentary decorum!

The Conservatives showed their outrage at this by saying ""We believe in raising the decorum of our political discourse" which, of course, is complete horseshit.

We are talking about a caucus led by Doug Ford.

Harden had nothing to apologize for. It is not like he posed with, say, neo-fascists.

Parliamentary niceties are not going to defeat the forces of reaction, especially in this era where we are witnessing an alarming rise of a newly emboldened far right.

Harden was at a rally where a protester had a sign expressing his disgust in colourful terms with what Ford is doing to the province. If being in the presence of this is somehow "going too far" we have all lost in advance.

It is a complete non-issue made into an issue only by Horwath's use of it to show everyone just how parliamentary the NDP is and how committed to the practices and ceremony of that august institution of bourgeois rule.

As the right increasingly abandons any pretense at civility or commitment to "democratic norms" this is like bringing a knife to a gun fight.