Higher TTC fares, more fake cops and a cancelled LRT -- Ontario's politicians ring in the holiday with a boot to the face for transit users 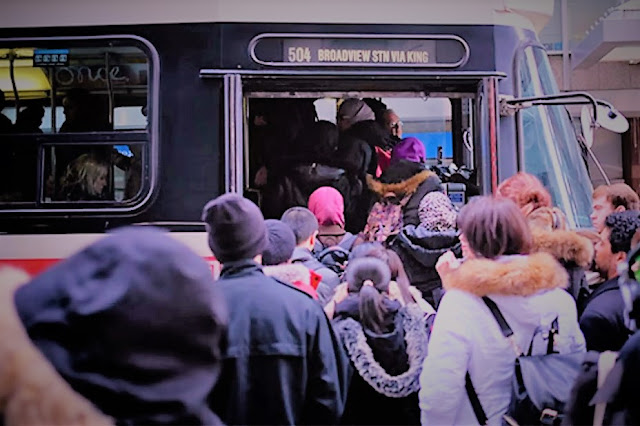 Sometimes a single headline can truly frame what is fundamentally wrong with the entire approach taken by neo-liberal politicians when it comes to essential public services like transit.

This juxtaposition of increasing fares yet again on people using public transit while spending millions of dollars to hire new pretend-police to harass and intimidate them so as to allegedly stop a fare evasion problem that does not exist  perfectly embodies how completely backward is mainstream thinking on this issue.

It comes as the Ford government has also just axed an incredibly important LRT project for Hamilton on which $160 million had already been spent and is now, presumably, being flushed down the toilet.

It is hard to overstate the importance of expanded, effective, accessible and affordable public transit in the fight against car culture, the climate emergency and social inequality. It is so important that you can -- and many have -- make the case that it should be fare free. That governments should invest the tiny fraction of the sums that are used to subsidize car driving -- from fossil fuel subsidies to the cost of maintaining roads that are almost solely used by private vehicles -- to make this a reality with all the many beneficial implications it would have.

Time and again, while claiming public transit is a priority they do the exact opposite of making it one.

To be clear, you can read as to why "The "fare evasion" narrative on the TTC is a total fraud". In fact "The policing of fare evasion reveals the twisted agenda of our politicians". As we noted in that piece "Pretty much every dollar spent policing fare evasion would have been better spent elsewhere."

It long overdue that politicians on all levels in Ontario be held to account for the decades of terrible decisions and detours they have made and continue to make when it comes to transit. Instead, this week alone, higher fares, more goons and yet another cancelled project that huge sums had been spent on.

Happy Holidays.
Posted by Michael Laxer at 7:20 AM