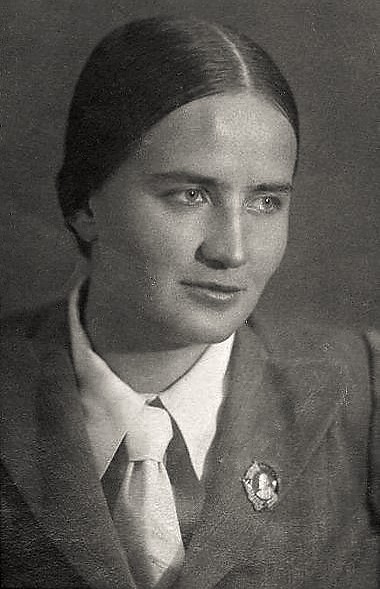 Marina Raskova originally wanted to be an actress or singer but became a chemist in the Soviet Union in the 1920s.

Having developed a great love of aviation, Raskova decided to train as a pilot and in 1933 became the first female navigator in the Soviet Air Force. During the 30s she became famous for her skills and for breaking many distance records.

On September 24 - 25, 1938, Raskova, with fellow pilots Valentina Stepanovna Grizodubova and Polina Denisovna Osipenko, "set a Fédération Aéronautique Internationale (FAI) World Record for Distance in a Straight Line Without Landing when they flew a twin-engine Tupolev ANT-37 named Rodina from Tchelcovo, an airport near Moscow, Russia, to the River Amgun, Khabarovsk Krai, in the Union of Soviet Socialist Republics. The distance was 5,908.61 kilometers (3,671.44 miles). The duration of the flight was 26 hours, 29 minutes."


The plane actually crashed after achieving this feat and Raskova had to wander in the wild for ten days before being rescued. All three pilots were awarded the honour of Hero of the Soviet Union.

When the Nazis and their fascist allies invaded the USSR in 1941, Raskova gave a speech calling for the formation of women's air combat groups and in October Stalin and the military command agreed. In the end three all-women air regiments were created.

These units were all known for their outstanding service and bravery. They included the "Night Witches"  588th Night Bomber Aviation Regiment which we looked at before in the post Nadezhda Popova, Hero of the Soviet Union, Ace Pilot and and Night Bomber b. December 27, 1921.

Raskova commanded the 587th Bomber Aviation Regiment until she was killed in a crash flying a bomber while trying to lead two other planes to safety during a snowstorm near Stalingrad, January 4, 1943.

After her death she received the first Soviet state funeral of the war, her ashes were buried in the Kremlin and she was awarded the Order of the Patriotic War I Class.

Posted by Michael Laxer at 8:45 AM