In an assassination that was illegal under international law and that represented a dangerous and reckless escalation of tensions between the United States and Iran and across the Middle East generally, the Trump administration ordered the killing of Iranian military leader Qassem Soleimani in Baghdad last night. Soleimani was widely seen as one of the most powerful men within the Iranian regime. 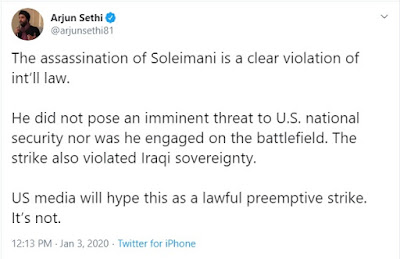 Since the beginning of his presidency Trump has been attempting to destroy all of the progress that the Obama administration made in negotiating a nuclear deal with Iran. Trump unilaterally withdrew from it under what were obviously false pretenses claiming that it was not working.

This was the line despite the fact that, according to the Washington Post in June, 2019:


The International Atomic Energy Agency has said on repeated occasions that Iran remains in compliance with the terms of the 2015 nuclear deal it negotiated with world powers aimed at preventing it from acquiring nuclear weapons.
The Trump administration abandoned that pact and reimposed a near-total embargo on Iran's economy, including its oil, shipping, manufacturing and banking industries.

In the wake of the withdrawal there were numerous other American provocations including saber-rattling after dubious American accusation of an Iranian attack on Japanese oil tankers in the Gulf of Oman and them trying to use the shooting down of a spy drone over Iranian air space as an example of Iran acting "aggressively" which was, of course, absurd.

In fact, as Mohamad Bazzi noted today in the Guardian, any crisis with Iran has been entirely manufactured by Trump and his quislings themselves:


When Trump took office, there was no US crisis with Iran. He created one – driven by hawkish advisers, many of whom had supported the invasion of Iraq in 2003, and his desire to undo one of Barack Obama’s major foreign policy accomplishments. In May 2018, Trump unilaterally withdrew the US from the Iran nuclear deal, and reimposed the US sanctions that have crippled the Iranian economy.
Trump constantly mentions his supposed desire to end US involvement in foreign wars – in Syria, Iraq and Afghanistan. But since May 2019 the Pentagon has deployed more than 14,000 troops to the Middle East. That’s when the latest escalation with Iran began, with several incidents in the Strait of Hormuz that culminated with Tehran shooting down a US drone that it claimed had violated its airspace.

As a counter to the onslaught of misinformation and American triumphalism -- such as the revolting CNBC tweet stating that "America just took out the world's no. 1 bad guy" -- we have bought together developments, news and viewpoints that oppose this blind defense of murderous American adventurism. 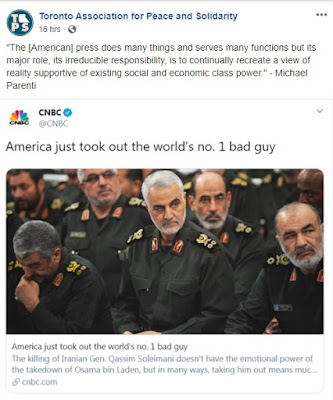 While the Americans have tried to frame the killing as having been to prevent further violence and to make the world "safer" this narrative does not hold up under even the slightest scrutiny.

The killing was so obviously a dangerous escalation that administration figures like Vice President Pence are already resorting to total fictions to justify it: 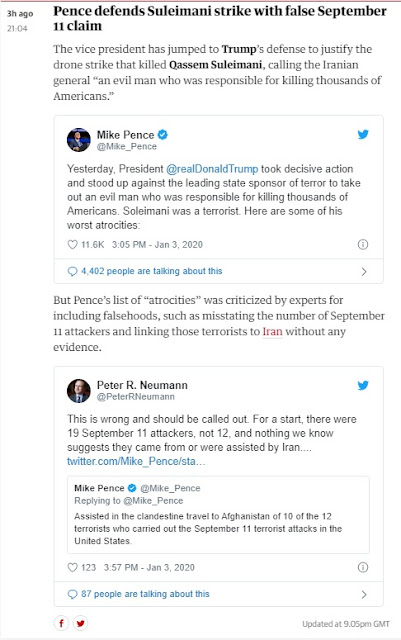 One motive was likely to drive a final nail in the coffin of the nuclear deal and the efforts of some European countries to keep it alive. As the Guardian noted the "assassination...may have dealt a devastating blow" to these hopes.

Telesur, an anti-imperialist source, gave an objective overview of Soleimani's life and history in the piece Who Was Qassem Soleimani and Why Was He Targeted by the US? which is well worth reading.

Robin Wright, in a New Yorker article whose headline called the killing "tantamount to an act of war", asks:


Was the U.S. attack an act of war? Douglas Silliman, who was the U.S. Ambassador to Iraq until last winter and is now the president of the Arab Gulf States Institute in Washington, told me that the death of Suleimani was the equivalent of Iran killing the commander of U.S. military operations in the Middle East and South Asia. “If Iran had killed the commander of U.S. Central Command, what would we consider it to be?” he said.

She also notes that:


The U.S. killing of Suleimani and the air strikes on Kata’ib Hezbollah over the weekend are an embarrassment to Iraqi leaders and a challenge to Iraqi sovereignty. They come at a time when Baghdad is gripped by the deepest political crisis since the U.S. invasion ousted Saddam Hussein, in 2003. The Prime Minister, Adel Abdul-Mahdi, a Shiite who spent years in exile in Iran, stepped down and is now playing only a caretaker role. There are already calls for the Iraqi parliament to demand the withdrawal of some five thousand U.S. troops—and hundreds more from more than a dozen coalition neighbors—that are still waging a campaign against isis insurgents. In a tweet, in Arabic, Mahdi called the assassination of Suleimani an act of aggression against the “Iraqi state, its government, and its people.” In an ominous signal to Washington, he said the killing was a “breach of the conditions for the presence of U.S. forces in Iraq.” The Iraqi Parliament is due to debate the U.S. military presence and vote on whether it should continue when it reconvenes, but the Prime Minister has the ultimate say as Commander-in-Chief, Silliman said.


Since October, Iraq has witnessed a wave of protests against corruption, government mismanagement, and deteriorating living conditions across the south and centre of the country. Protesters have also rejected Iranian interference and support for the government.
Never had Iran's influence in Iraq been so precarious since the 2003 Iraq war. Iranian-affiliated PMUs have been accused of targeting the protesters, who for the most part are their Shia coreligionists. The Iranian consulates in Najaf and Karbala were torched and Adel Abdul Mahdi, the Iraqi prime minister, whom Iran supported, had to resign in the face of the escalating violence against peaceful protests.
Iraq has never faced an intra-Shia crisis on this scale. The US attack, however, will likely undermine the Iraqi protest movement and may reunite Shia forces. While Iraqis may have protested against the PMUs, they would take even more umbrage at the US attacking one of their own leaders who led the fight against the Islamic State of Iraq and the Levant (ISIL or ISIS). The US made al-Muhandis a martyr.
Trump's decision to assassinate him and Soleimani offered a lifeline to the Iranian-affiliated militias, as well as the Islamic Republic, shifting the Iraqi demonstrators' anger from corruption to the brazen violation of national sovereignty.

In addition to making matters worse for the United States in Iraq, the assassination seems to have united popular opinion in Iran itself where many have been recently protesting against the regime and its austerity measures and general brutality.

We read in Common Dreams that:


Hundreds of thousands of Iranians flooded the streets of Tehran and other cities across the country Friday to condemn the U.S. assassination of military leader Qassem Soleimani, discrediting Secretary of State Mike Pompeo's prediction that the people of Iran would "view the American action last night as giving them freedom."
Images and videos of massive rallies circulated on social media as Iranians gathered following Friday prayers to denounce Soleimani's killing, which was ordered by U.S. President Donald Trump and carried out via drone strike Thursday night.
Soleimani's assassination, according to Al-Jazeera, "triggered a wave of emotions and garnered a response of solidarity and retribution across the otherwise divided Iranian political spectrum."

Meanwhile it is hard to see how the killing has made the world safer given that "Iran's Supreme Leader Ayatollah Ali Khamenei quickly vowed "harsh retaliation" in response" while the "Pentagon ordered 3,000 reinforcements to the region" and American "diplomats were reportedly told to pack their bags in case of sudden evacuation"

As Bernie Sanders stated, far from improving the situation, "Trump promised to end endless wars, but this action puts us on the path to another one."

There is also a certain irony to this given that Trump himself predicted that a US president would use a war with Iran to win reelection. He just did not predict it would be him. 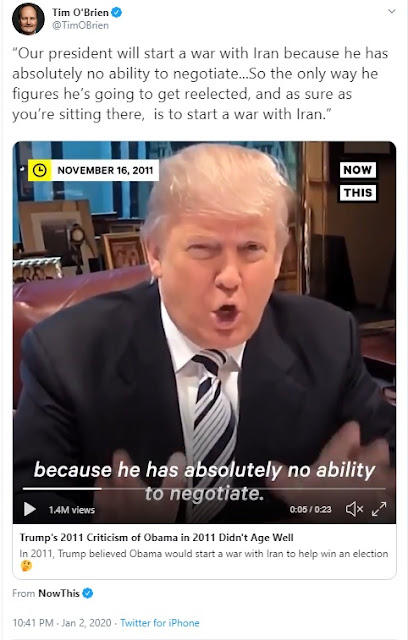 Posted by Michael Laxer at 4:07 PM