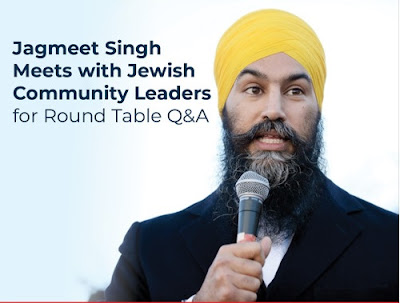 In a predictable and totally revealing turn of events, NDP leader Jagmeet Singh seems to have joined the ranks of politicians like Donald Trump, Boris Johnson, Justin Trudeau and the leadership of Israel on the issue of the Boycott, Divestment, and Sanctions (BDS) campaign against Israeli apartheid.

According to Rabbis Edward Elkin, Baruch Frydman-Kohl and Chaim Strauchler in the Canadian Jewish News, during an interview on December 18, 2019, Singh stated "that the NDP supports the International Holocaust Remembrance Alliance (IHRA) definition of anti-Semitism as an educational tool to help policy makers address the ever-evolving scourge of Jew-hatred."

You can listen to the interview at a link below.

Just five days prior to this, Kenneth Stern, who drafted the IHRA working definition wrote again in the Guardian of how he had disavowed it as "rightwing Jews are weaponizing it".


...unequivocally condemned BDS, stating that it “creates tensions and divisions,” and “does not advance peace.” Singh stated that neither he nor the NDP support BDS, believing that it is not “the right path forward.”
Singh spoke positively of his 2016 fact-finding mission to Israel, about the Jewish state’s nation-building experiment, its contribution to technological innovation, the revival of Hebrew as a language, and the diverse and complex range of political positions among Israelis. He condemned Iran and supported sanctions against the regime, while still seeking cautious ways, alongside tough sanctions, to engage that country in order to change its behaviour.

The authors contrast Singh positively with UK Labour leader Jeremy Corbyn who, of course, was the victim of an unrelenting smear campaign on this issue.

You can listen to the podcast here: CIJA Podcast – Jagmeet Singh.

This is a terrible, appalling position. While he says he opposes attempts to ban the movement on free speech grounds, he clearly states that both he and the NDP oppose BDS starting at around the 28 minute mark in the podcast.

The NDP, over and over again, tells us exactly what it is. As I have said before, it is time for us to listen.