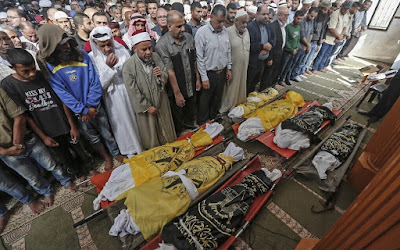 If you are looking for this week's news, videos and updates about the ongoing imperialist backed right wing racist coup in Bolivia see: "It’s called a coup" -- News, Videos, Statements and Developments about Bolivia

Today marks thirty years since the massacre of six Jesuits, their housekeeper, and her daughter by US-trained forces. But US brutality in Latin America isn’t a thing of the past: top military officials involved in the coup against Bolivian president Evo Morales were trained by the United States, too. 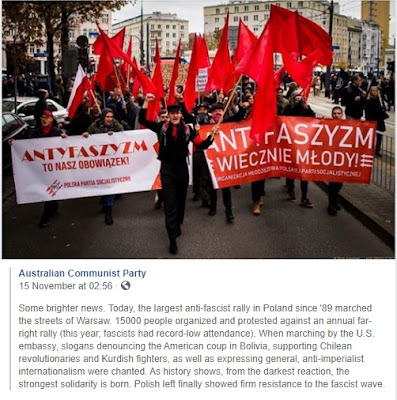 2) 'That can't be my Winnipeg': Racism on the rise here, says woman born and raised in city

'I am forced to realize we are not a diverse, inclusive city,' says 3rd-generation Winnipegger Reanna Khan

3) ‘I’m afraid of the guys with guns’: Saskatoon police vs. Indigenous people

On the night of June 29, 2016 Dion Ladouceur ended up on his bedroom floor after being stunned by a police Taser.

Progressives need to do more work to organize the public on the benefits of public dental care, because there is popular support for it. A 2019 Ipsos poll found that 86% of Canadians surveyed support government funded dental care for those without insurance. Abacus found 66% of Canadians surveyed support expanding public healthcare to include prescription drugs, dental and vision care. If progressives were better organized, we could make strides in pushing for a universal dental care plan that not only covers everyone, but also saves money.

The event (which listed Facebook as a “Gold Circle” sponsor, according to The Verge) in Washington, D.C.’s Union Station garnered attention from more than just the 2,000 members of the society in attendance, though. Both outside and inside the event, protesters continued a public pressure campaign against Kavanaugh reminiscent of the mass protests last year during his confirmation hearings.

We just got the news that the Texas Court of Criminal Appeals has granted Rodney Reed an indefinite stay of execution, meaning he no longer has an execution date. This news came just hours after the Texas Board of Pardons and Paroles unanimously recommended a reprieve of Rodney’s execution.

Guess this is why they don’t call it the Mathematics Transportation Authority.

For months, tear gas clouded the boulevards of Paris most Saturdays as protesters skirmished with riot police, whose heavy-handed response drew condemnation from rights groups. 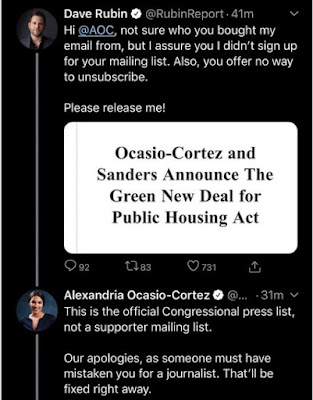 Children are growing up in a warmer world where they'll face more and different health problems than their parents experienced, an international report by doctors says.

11) Sawant Says the Candidates Who Supported Homeless Sweeps "Got Swept"

Kshama Sawant made her way to the podium inside City Hall, her progress slowed by handshakes and hugs from supporters. Meanwhile, the freshly re-elected council member's staff was organizing people behind the podium. "Remember," one organizer said firmly, energizing the crowd, "Seattle voters decisively said no to Amazon." The crowd cheered. "When we fight, we win!" He shouted and the crowd echoed it back.

12) Opinion: From conception to cremation, Bill 207 could deny wide range of services

Anyone who lives in a remote rural area knows the frustration and potential danger of being unable to get immediate emergency medical services. Now imagine if the only emergency physician in town refused to help because you don’t attend his church. Bill 207 gives such gatekeeping authority, with the power to affect all Albertans, from conception to cremation.

Despite Canada’s claim that it’s a multicultural country, that’s not the reality of one of the country’s national sports, ice hockey.

14) Why Are Homeless People Allowed To Die In Toronto?

On November 7, the Ontario Coalition Against Poverty (OCAP) held a vigil for Kevin Dickman, a homeless man in Toronto, whose body had been pulled from the Don River the previous month. We gathered outside the Peter Street referral centre that homeless people attend to try and access a shelter bed. It has always been billed as a place of last resort, where those who have no other options may go. Theoretically, people in the facility are waiting for a shelter bed but, in practice, the chairs or floor in the waiting room are often all they get. Recently, however, even this last resort has failed and a fifty person limit has been placed on those who can wait for shelter in the centre. Now, people with nowhere else to go are turned away into the night.

Spain’s ruling socialist party has reached a preliminary coalition deal with the anti-austerity Unidas Podemos to try to form a government after the country’s second inconclusive election in seven months.

17) The GOP attacked Ilhan Omar for calling Stephen Miller a ‘white nationalist.’ She says his leaked emails prove her right.

18) McDonald's bosses ‘won’t keep on getting away’ with paying poverty wages, McStrikers say

WORKERS told McDonald’s bosses they “won’t keep on getting away” with handing people poverty pay, as the fast food giant was rocked by strike action across London yesterday.

19) I Was the Last Communist Premier of East Germany

The opening of the Berlin Wall on this day in 1989 brought the downfall of the East German regime and the appointment of reformer Hans Modrow as head of government. Thirty years on, he speaks to Jacobin about his experiences on that day and in power, and how German reunification went wrong.

The Communist Party of India (Marxist-Leninist) and the CPI (ML) Red Star on Monday addressed a joint press conference to announce their support for each other and to lash out against the Bharatiya Janata Party (BJP) and Congress.

Labor leader Gough Whitlam rode to power in 1972 on a wave of widespread progressive sentiment and mass protests. His election ushered in a new political era in Australia, particularly in terms of foreign policy.

The historic conflict between Israelis and Palestinians is evolving not just on the streets of Gaza, Jerusalem and the West Bank. The author of a new book argues it is also a war of words that is being fought and won by Israel on the international stage.

23) Products from Israeli settlements must be labelled, EU court rules

The European Union’s top court has ruled that EU countries must identify products made in Israeli settlements on their labels, in a decision welcomed by rights groups but likely to spark anger in Israel.

At least 24 Palestinians have been killed by Israeli air strikes on Gaza, including a father and his two sons, as the military continued its air campaign for a second day Wednesday.

Israel unleashed an air campaign against Gaza after it assassinated senior Islamic Jihad commander Bahaa Abu al-Atta and his wife on Tuesday morning.

26) Buttigieg supports Israel’s missile attacks on Gaza, but condemns Palestinians when they respond

Israel’s military campaign against Gaza has entered its second day and so far it has left 24 Palestinians dead (including a 7-year-old boy) and at least 70 injured. The current round of violence began on Tuesday after Israeli strikes killed Palestinian Islamic Jihad commander Bahaa Abu el-Atta, his wife, and four others. The attack prompted retaliatory rocket fire from a number of Palestinian groups. Israel continues to attack the region. “They have one choice: to stop these attacks or absorb more and more blows. Their choice,” declared Israeli Prime Minister Benjamin Netanyahu.

27) Killing Islamic Jihad Leader Got Israel Nothing. So Why Do It?

Once again the sacrosanct unity has come. Once again we are one people, without opposition or public debate, a parade of yes men and cheerleaders in the media, bloodshed with no regrets, as always happens in these sickening, “quiet, we’re shooting,” situations.

The “pinpoint” strike or “targeted killing” is back. Mainstream media simply can’t resist such terms even when the wording is clearly misleading.


Israeli air strikes on the Gaza Strip have killed eight members of the same family, the Ministry of Health announced today.

Breaking: No One in Israel Knew They Were Committing a Massacre, and They Didn't Care

Reporter Yaniv Kubovich revealed the shocking truth on Friday on the Haaretz website : The target had not been re-examined for at least one year prior to the strike, the individual who was supposedly its target never existed and the intelligence was based on rumors. The bomb was dropped anyway. The result: eight bodies in colorful shrouds, some of them horrifically tiny, all in a row; members of a single extended family, the Asoarkas, five of them children — including two infants.

On Wednesday, around 100 students staged a dramatic walkout during an event at the Harvard Law School, where Dani Dayan, Israel’s consul-general in New York City, was scheduled to speak.

November 14 will mark the first anniversary of the death of Camilo Catrillanca, an Indigenous man who was shot to dead by a Military Police (Carabinero) officer in La Araucania. Social movements and progressive parties have called for demonstrations in more than 40 cities. 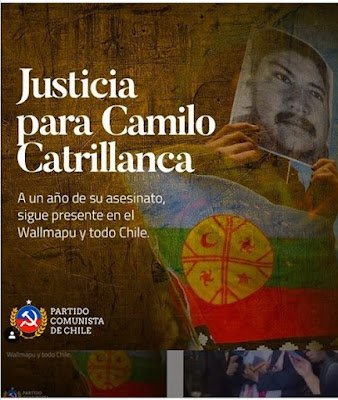 ‘It’s Mutilation’: The Police in Chile Are Blinding Protesters 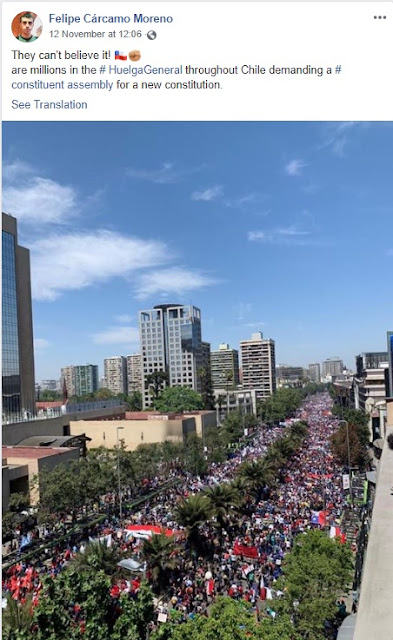 Chile is still rising up against neoliberalism and government repression.

Despite the billionaire president of Chile giving in to protesters to re-write the constitution, millions of Indigenous, students, workers from all sectors, young and old all went on strike and shut down the entire country to protest against neoliberalism and demand a new constitution decided on by the people.

32) Chile To Vote On New Constitution But State Violence Continues

Chile's lawmakers on early Friday agreed to hold a referendum next April on replacing the constitution drafted by Augusto Pinochet's dictatorship (1973-1990), ​​​​​​​bowing to demands of millions who want the country's social and economic model overhauled.​​​​​​​

Protests in Iraq's capital Baghdad continued on Monday as both Iraqi forces and protesters tried to dislodge each other from an area leading to the Green Zone.

A large tree trunk, branches, boulders and wrought iron piled in the middle of Delmas 75 street, not far from the Canadian Embassy, is one of the barricades that have blocked traffic every day for a month and a half in the Haitian capital. 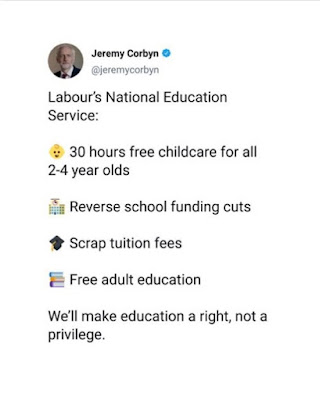