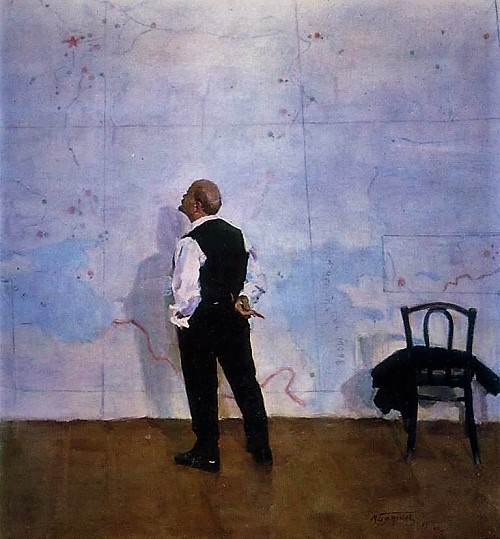 "After proving that, by revolutionary organisation, we can repel any violence directed against the exploited, we must prove the same thing in another field by setting an example that will convince the vast mass of the peasants and petty bourgeois elements, and other countries as well, not in word but in deed, that a communist system and way of life, can be created by a proletariat which has won a war. This is a task of world-wide significance. To achieve the second half of the victory in the international sense, we must accomplish the second half of the task, that which bears upon economic construction. We discussed this at the last Party conference, so I think there is hardly any need or possibility to go into detail on the various points; this is a task that embraces every aspect of economic construction. I have briefly described the conditions ensuring bread for the industrial workers and fuel for industry. These conditions are fundamental in providing the possibility of further construction. I should add that, as you have seen from the agenda published in the newspapers! the question of economic construction will be the main item to be discussed at the forthcoming Congress of Soviets. The entire agenda has been drawn up so that the entire attention and concern of all delegates and of the whole mass of Government and Party workers throughout the Republic will be concentrated on the economic aspect, on the restoration of transport and industry, on what is cautiously termed “aid to the peasant economy” but which implies far more—a system of carefully thought-out measures to raise to the appropriate level the peasant economy, which will continue to exist for some time to come.


The Congress of Soviets will, therefore, discuss a report on the electrification of Russia, so that an all-over economic plan for the rehabilitation of the national economy, of which we have spoken, can be drawn up in the technological aspect. There can be no question of rehabilitating the national economy or of communism unless Russia is put on a different and a higher technical basis than that which has existed up to now. Communism is Soviet power plus the electrification of the whole country, since industry cannot be developed without electrification." - Lenin, Moscow November, 1920

Posted by Michael Laxer at 4:30 PM