Where are Singh and the NDP on the coup in Bolivia? 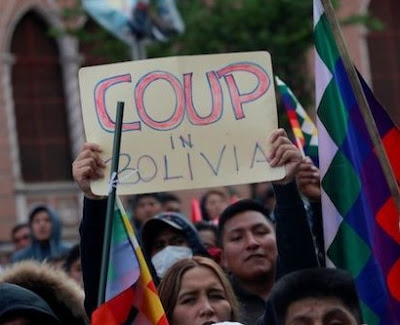 Update: Singh finally spoke up with a positive statement.

The importance of pressure from the left.

The legitimate President of the Bolivian Senate,  Adriana Salvatierra, who according to the Bolivian constitution should become the nation's, President was attacked today by the police as she attempted to access a chamber to which she was elected.

There are widespread reports of police and military violence against and arrests of supporters of Morales and MAS. The woman who has appointed herself as President is a Christian fanatic who has made outrageously racist comments about Bolivia's Indigenous people. Morales has been forced to leave the country even though he clearly won the highest number of votes in the first round of the presidential elections. You can read the details of this violence, how the coup unfolded and about resistance to the coup at: "It’s called a coup" -- News, Videos, Statements and Developments about Bolivia

This is as obviously a coup as you can possibly get and still Jagmeet Singh and the NDP has officially said nothing.

In fact he tweeted he is meeting Trudeau tomorrow and did not mention the coup that Trudeau is supporting at all. The last statement the party released on its website today criticizes the government for not moving fast enough on the CF-18 fighter jet contract.

This is so staggeringly shameful it beggars belief.

Statements or tweets by a few NDP MPs is not enough. The leader needs to step up and the party needs to take an official position. Is the NDP on the side of the Bolivian people and Bolivian democracy in opposition to a racist right wing coup or is it another imperialist stooge party?

Singh must clarify this now.