"The miracle we are performing...could not be performed in a capitalist society" -- Cuban socialism's remarkable accomplishments despite the criminal, imperialist blockade 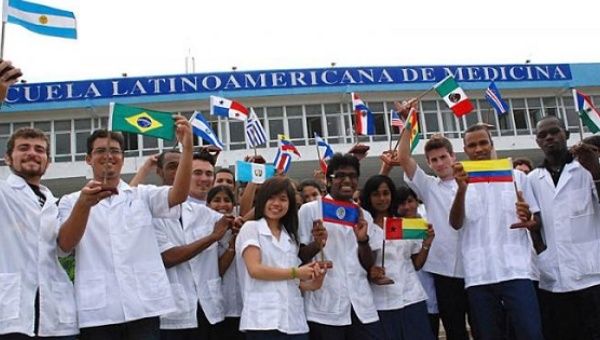 Students from around the world study for free to become doctors at Cuba's Latin American School of Medicine which graduated 466 doctors from 84 countries in 2019, "bringing the total of medical graduates trained at the unique school to over 29,000 – including 182 doctors from the United States".


With research contributed by Nathaniel Laxer

February 7 marked the anniversary of the imposition of the illegal and criminal, imperialist economic blockade of Cuba by the United States in 1962. Over the course of the last near sixty years of trying to strangle the Cuban economy and destroy its socialist system as a viable alternative in Latin America it has cost the Cuba at least $130 billion US according to the United Nations.

Despite this crime and the terrible impact that it has had on the Cuban people -- especially in the early 90s in the wake of the collapse of the Socialist Bloc and USSR when Cuba lost 85% of its foreign trade and investment and saw its GDP decline by 35%, a time known in Cuba as the "special period" -- the accomplishments of Cuban socialism remain truly impressive.

Once you realize the framework in which Cuba has maintained its independence and freedom, it becomes clear that only socialism can account for what it has achieved.


Even factoring in its low GDP per capita, the Human Development Index (HDI) lists Cuba in the “high human development” category; it excels not just in health and education, but also in women’s participation and political inclusion. Cuba has eliminated child malnutrition. No children sleep on the streets. In fact, there is no homelessness. Even during the hungry years of economic crisis of the 1990s, Cubans did not starve. Cuba stuck with the planned economy, and it enabled them to ration their scarce resources.
Yes, salaries are extremely low...but Cubans’ salaries do not determine their standard of living. About 85% of Cubans own their own homes and rent cannot exceed 4% of a tenant’s income. The state provides a (very) basic food basket while utility bills, transport and medicine costs are kept low. The opera, cinema, ballet and so on are cheap for all. High-quality education and healthcare are free. They are part of the material wealth of Cuba and should not be dismissed – as if individual consumption of consumer goods were the only measure of economic success.

We could look at many areas, but one area where the magnificent legacy of the revolution shines through most clearly is in healthcare.


"Vaccination is one of the most powerful tools we have to prevent disease and save lives," said Carissa F. Etienne, Director of PAHO, at the opening ceremony of Vaccination Week in the Americas, which took place at the Victoria de Giron Institute of Basic and Preclinical Sciences in Havana. Ministers and other high-level health authorities from Latin America, the Caribbean, and other regions of the world participated in the launch.
Cuba was chosen to host the regional launch of the campaign because of the great strides the country has made in vaccine development and in eliminating vaccine-preventable diseases, including polio, neonatal tetanus, diphtheria, measles, rubella, congenital rubella syndrome, whooping cough and mumps, said Etienne. "Cuba is a shining example of commitment, investment and passion for health."
Tedros Adhanom Ghebreyesus, Director General of the World Health Organization (WHO), also participated in the regional launch of Vaccination Week in the Week in the Americas, which has served as the base for World Immunization Week since its start in 2012. "Not only does Cuba enjoy universal coverage for vaccines, (it is) also a producer and exporter of these life-saving products," said Dr. Tedros. "World Immunization Week is an opportunity to remind all nations and all people of the incredible value of vaccines."


During the opening ceremony, the Cuban Deputy Health Minister, Jose Angel Portal Miranda, emphasized that in Cuba "vaccination is available to everyone, free of charge, and can be accessed from primary health care providers. As a result, vaccination coverage in Cuba for all vaccines currently stands at 98%, resulting in high population immunity."
Portal Miranda also highlighted that an average of 4.8 million vaccines against 13 diseases are administered each year in Cuba, with eight of the 11 vaccines that are given being produced in the country itself. He also reminded the audience that the first polio prevention campaign in Cuba took place in 1962 with the vaccination of 2.6 million children and adolescents under the age of 15.


In fact, Cuba's accomplishments in healthcare are simply stunning. As the BBC noted: "Despite spending a fraction of what the United States spends on healthcare (the World Bank reports Cuba spends $431 per head per year compared with $8,553 in the US) Cuba has a lower infant mortality rate than the US and a similar life expectancy."

An article in the International Journal of Epidemiology noted that Cuba had the lowest AIDS rate in the Americas, the most effective dengue control programme in the Americas, the highest rates of treatment and control of hypertension in the world, had reduced its cardiovascular mortality rate by 45%, provided a free medical education not only for its own students but also for students from Africa and Latin America, and had created an indigenous biotechnology sector which among other things produced the first human polysaccharide vaccine.

Similarly, Cuba has made immense strides in the eradication of tuberculous, which remains a scourge throughout much of the world. In fact, "in 2013, the World Health Organization (WHO) included Cuba on its select list of countries with the potential to eradicate the illness by 2035".

In 2019 Cuba achieved it highest proportion of doctors to people ever, with 9 per 1,000. This is one of, if not the highest, ratios in the world. By contrast, Canada and the United States have 2.6.


Jose Angel Portal Miranda, head of the Ministry of Public Health (Minsap), said that after the revolution, there were barely 3,000 doctors in Cuba. The University of Medical Sciences of Havana, since then, has trained more than 376,000 health professionals including doctors, nurses, and other health professionals.
The head of the Minsap said 35,787 foreign students from 141 countries graduated from Cuban universities, mainly from Africa and Latin America.
This year more than 10,000 medical professionals graduated from Havana, 1,535 of them are from foreign countries. Miranda also stressed that no other small developing countries could achieve such a feat.
Out of the more than 485,000 workers of the National Health System (SNS), some 234,000 are professionals from different branches of medical sciences who work in more than 13,000 health institutions in the country.

Meanwhile, despite the blockade and its stretched resources, Cuba's international medical solidarity is legendary and not just in educating students from other countries to become doctors for free.

From Mozambique, to the Solomon Islands, to tiny Kiribati, to the fight against Ebola, tens of thousands of Cuban doctors have worked around the world in solidarity with other peoples for decades. They even offered aid to the United States in the wake of Katrina which the imperialist cowards declined.

Right wing governments, such as the racist coup regime in Bolivia, have recently sent Cuban doctors home at the behest of the Americans and at great harm to their own people,  but they continue to do their important work in countries like Venezuela.

No matter how hard they try to malign Cuba's internationalist efforts the forces of reaction cannot erase its incredible legacy and history. As of 2019:

Given all this it should come as no surprise that in 2019 the annual Save the Children report that "evaluates 176 countries using international indicators on infant mortality, access to education, nutrition, protection against harmful practices, such as child labour, child marriage, homicides and forced displacement" found that Cuba was safest country in Latin America and the Caribbean to be a child or adolescent.

Still, despite massive international opposition to it, the US blockade continues. In November 187 nations voted for a resolution for it to end at the United Nations, with only 3 voting against and 2 abstaining. Again the United States with its criminality and indifference to international law and opinion shows that it is the world's true rogue nation.

But Cuba stands courageously against this and sets an example for the entire world. Its fight against American imperialism is the world's fight.


When we talk about what's happening to Cuba, we're already talking about what could happen to any country in the world, especially any Third World country. That's why the battle you are waging today for Cuba is a battle you are waging for the entire world, a battle you are waging for the Third World and for all the nations which have been blockaded for centuries, because they were colonized, exploited and their children enslaved...
...So, what has the world suffered? A 500-year-old blockade. What is neocolonialism? A blockade. What are those neoliberal and ultrareactionary policies? A blockade which forces governments to close their hospitals, to close their schools, to throw the people out onto the streets, to allow people to remain destitute. And in our country, not even during special period when our imports have been reduced to 25 percent of what they were have we closed one single school, one single day-care center, one single hospital. No one has been left destitute. When we don't have any work for them, we pay our workers a salary. At least we give them a salary and though they may have to go home, we don't abandon them...
...What we are doing, the miracle we are performing...could not be performed in a capitalist society. That's why very rich countries that are not blockaded, countries in Latin America that receive aid from the World Bank and other financial institutions, and have a high number of exports, far higher than ours, have closed thousands of schools, hospitals and social institutions. That is what the world is going through. That is why I insist on the idea that to fight for Cuba's cause today is to fight for far more than just Cuba: It is to fight for a just cause for everyone. 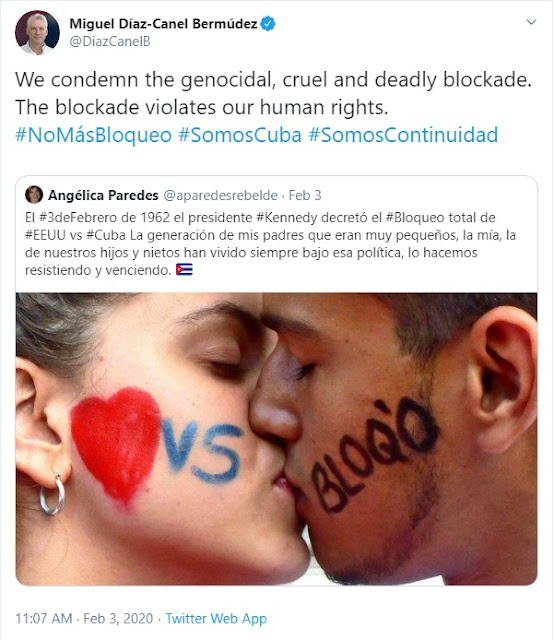